TIME TO VENTURE BEYOND THE IVORY TOWER: My message to the 100+ African American criminologists

We can wait no longer for an invitation to meaningfully participate in crime prevention decision making processes. Our voices must be heard now!

In this third decade of this new millennium, the prevention of conduct labeled criminal remains one of the most perplexing challenges facing our nation.

Government reports about the nature and extent of criminal conduct continue to paint a horrifying picture of excruciating suffering by too many American families.

More than 200 million life-altering crimes have occurred since the dawn of the 21st Century. No community is spared the scourge of criminal conduct.

Violent and property crimes happen on planes and trains and in bus stations.

Religious institutions, hospitals, college campuses, and secondary schools too report that, despite installation of mechanical crime prevention measures including sophisticated security systems and armed security personnel, they too are victimized by criminal conduct.

Current crime prevention strategies are undeniably unsuitable for the challenges encountered during this 21st Century.

The collective weight of many millions of life-changing violent and property crimes occurring annually is tearing at the very fabric of American society.

Families, civic associations, schools, religious organizations, businesses, social media communicators, and news media outlets are raising urgent questions about our governments’ ability to protect us from criminal victimization, and the commitment to do so within the boundaries established by our federal and state constitutions.

According to the Crime in America reports, published annually by the Federal Bureau of Investigation (FBI), more than 10 million violent and property crimes are reported to police each year.

FBI reports confirm that less than half of the violent crimes and less than 20 percent of the property crimes of which police are aware are “cleared” by an arrest. Still unknown are the apprehension failures for other types of known offenses, including but not limited to interstate and transnational crimes such as human trafficking and financial fraud. 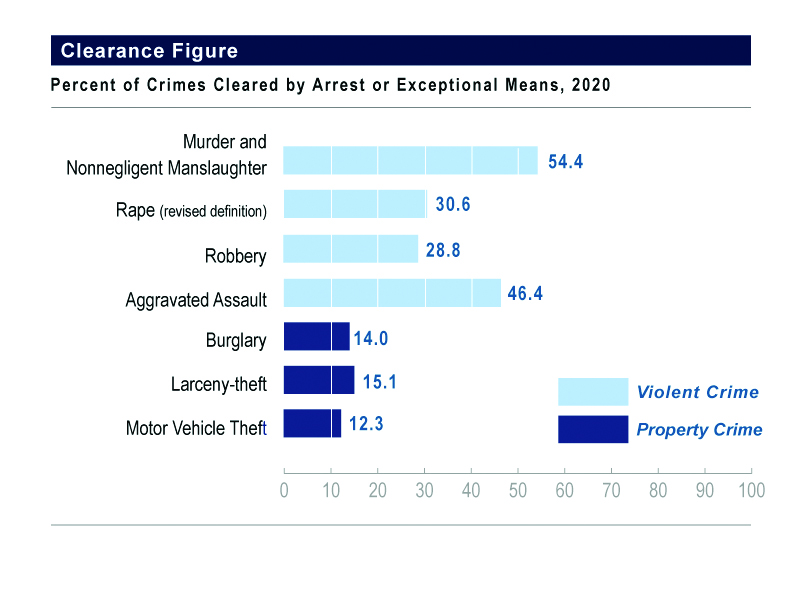 Frankly, we still do not know how many violent and property crimes are occurring or the identities of most offenders and victims. Therefore, any opinions or conclusions about the who and/or the why of criminal conduct – in the aggregate – lack reliable evidence and are based upon speculation and conjecture.

We do know police cannot arrest all law violators. Much of their attention is focused on enforcing vice crime laws not even mentioned in the above noted charts.

Furthermore, we do know our courts do not convict all accused, and too frequently fail to appear impartial. Some accused by prosecutors and convicted by our courts are not guilty of the alleged offenses.

Moreover, we also know that most convicted are not imprisoned – millions are on probation and/or fined. Nearly all of the more than two million imprisoned are non-white and/or poor. And too many released from confinement are still treated as outcasts, deprived of the right to vote and equal opportunities for housing, employment, and education.

The $300 billion annual price tag to operate various criminal law enforcement agencies is, at best, inexplicable. Since the year 2000, trillions of dollars have been spent on crime control measures.

The money spent has failed to prevent crime, increase our safety, or decrease our fear of victimization.

The money spent has produced nationwide protests about police use of excessive force, selective prosecutions, biased courts, and inhumane imprisonment.

The money spent has resulted in calls to defund police and radically reform how criminal law enforcement agencies operate.

We now are at an important crossroad in America’s history.

Do we continue to travel down the paved road built upon criminological theoretical paradigms developed in and before the 1900s and the decades old strategies based upon them? Not in my view. More of the same is simply not good enough.

In this 21st Century, we must venture into previously unchartered territory. Our charge includes striving to perspicaciously look forward – anticipating, planning for, and making crime prevention policy recommendations suitable for this 21st Century.

In my view, we need a new paradigm to inform our design and implementation of effective and constitutionally compliant crime prevention policies. As DC Justice Lab’s mission statement teaches, now is the time for “fully reimagining the systems that fail us” and to be “committed to not only fighting against the past that holds us back but fighting for the future we want.”

In the coming months and years, legislators and other policy makers nationwide will consider a wide variety of crime prevention proposals. Certainly, these proposals will stimulate a rigorous debate about what conduct is criminalized by our legislatures and why, and who is labeled criminal and why. Some questions already known will be answered.

However, these debates must include a diverse set of voices encouraging a search for those questions which have not yet been asked.

Among these voices must be ours – now more than 100 African Americans holding a doctorate degree in criminology and/or criminal justice. Our voices must be included as crime prevention policies suitable for this 21st Century are designed and implemented because we have valuable information to share.

We must stop waiting for an invitation to participate in this crucially important public discourse. Given the urgency of the challenges before our nation, we have a duty to raise our voices beyond the soft whispers among academics enjoying the privileged seclusion of the ivory tower.

To begin turning up our volume, I will begin hosting a monthly zoom discussion session for African Americans holding a Ph.D. or D. Crim. degree in criminology and/or criminal justice. To join this discussion, please contact me at: AACriminologists@gmail.com

Publisher’s Note: In 1984, Dr. Sulton received the Ph.D. degree in criminology and criminal justice from the University of Maryland-College Park. She has taught at several colleges and universities, including Spelman College and Howard University; published scholarly books and articles on crime; and worked with civic groups nationwide on crime prevention issues.

TIME TO VENTURE BEYOND THE IVORY TOWER: My message to the 100+ African American criminologists