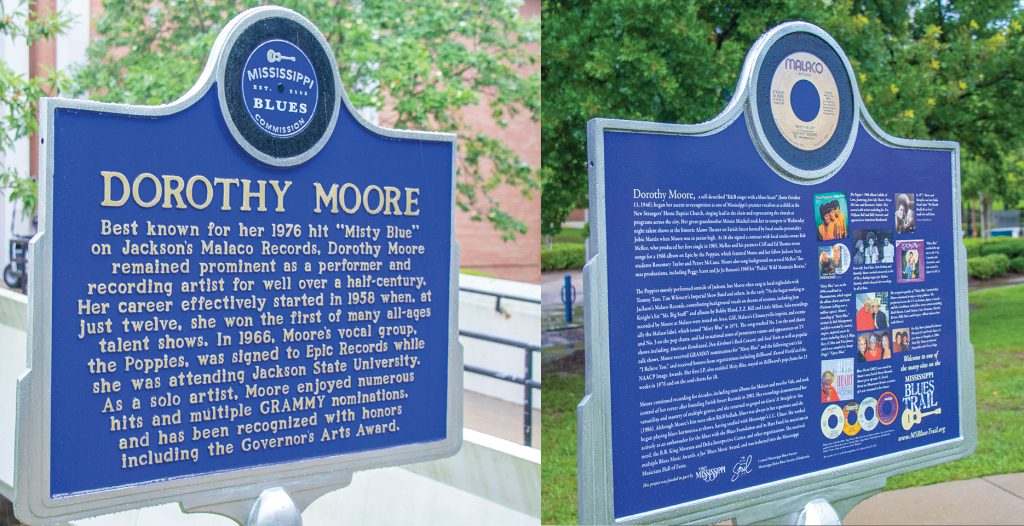 The F.D. Music Hall on the Jackson State University campus is the site of the 211th Mississippi Blues Trail Marker and honors Jackson native Dorothy Moore.

A modern-day cavalcade of music industry personnel, fans, friends, and family converged upon Jackson State University amid a thunderstorm warning. Nonetheless, the sun broke through the clouds just long enough for the crowd of approximately 200-300 well-wishers to get inside the F.D. Music Hall Auditorium before the formal ceremony began.

Once inside the music hall auditorium, a star-studded group ascended the stage. This group was led by Kamel King,

Tourism Development Bureau Manager of the Mississippi Development Authority, who served as the program guide for the sometimes formal and sometimes informal event. As part of his opening remarks, King instructed the audience that fist pumps, not hugs, were the appropriate greeting of the day for Miss Moore. However, he noted, “I already got my hug in with Dorothy before that no hug decree was issued.”

King instructed the crowd to give Queen Dorothy Moore a rousing round of applause and said, “The Lord knew to hold off the rain long enough for us to get in here.” Then he talked about how Mississippi’s Blues Trail Markers are the biggest tourism draw for Mississippi as the Birthplace of America’s Music and the Birthplace of the Blues. He also told the audience that Dorothy Moore is the author of all these hits that elicited a standing ovation, then verbalized his personal sentiments, “She is the humblest person on the planet; she has touched my heart!”

Being the son of music industry pioneer Lee King, of the 1970s “Black Gold” TV Dance Show, Kamel relayed his father’s regrets for not being present for the occasion and informed the audience that Dorothy Moore was the fi rst singer to ever appear on “Black Gold.”

Dorothy Moore’s personal pastor, the Reverend Robert M. Blanton offered a prayer of blessings for the event saying, “What makes me feel so good – it makes me want to run on cause I can’t hold my peace – oh, when you hear Dorothy Moore sing, we all knew it is the amazing love of God that she is being memorialized today with a marker.”

Dr. Ricky Thigpen, president and CEO of Visit Jackson welcomed the crowd to “The City with Soul” saying, “It’s because of the people that makes it a city with soul.” Paraphrasing Kipling, Thigpen spoke of how Dorothy Moore has walked with kings but never lost the common touch. He said, “I call her my friend. She’s humble, caring, and loving and that’s what makes her a superstar. Because she can’t take that marker outside with her, I’d like to present her with a picture of it that she can take home with her.”

Craig Ray, Mississippi State Director of Tourism said, “I’m honored to be here today on stage with a star. We now have 211 Blues Trail Markers throughout the state, and this is a special day. I thank everyone who worked to make it happen and for everyone being here. And it is my pleasure to introduce Sen. John Horhn.”

Sen. John Horhn presented a special proclamation to Dorothy Moore on behalf of Lieutenant Governor of Mississippi, Delbert Hoseman, and the Mississippi State Senate. Sen. Horhn said, “I remember seeing Dorothy Moore & The Poppies in those shimmering gowns while I was a student at Pineywoods, I thought they were the Supremes. Mississippi’s music has changed the world. We at the Senate honor our citizens. I can’t think of a better place to honor Dorothy Moore than Jackson State University, Thee I Love. When you come in her presence, you know she’s someone special.”

Mayor Chokwe Antar Lumumba said, “We are living in history today as we honor Queen Dorothy Moore in her hometown. What is in this Mississippi soil that produces these talents? We take control of our own narrative today, telling our story that influences the world. She is an ambassador of Mississippi music and today with this marker we construct our narrative and tell her story.”

Jackson State University President Thomas Hudson said, “Dorothy Moore is a proud product of JSU. She is the soil of Mississippi. I hope this marker will serve as sign to students that they can do great things. We thank you all for sharing her marker with us.”

Very personal remarks came from the next two speakers who had fi rsthand experiences with Dorothy early on in her career.

Marty Gamblin, Consultant for the Mississippi Arts & Entertainment Experience (The MAX) in Meridian, MS, was Dorothy Moore’s manager. He jokingly said, “I was like Dorothy’s Uber driver. It was like “Driving Miss Daisy” in reverse. We developed a very close friendship. I was fortunate enough to be a part of being with her early on. God bless Dorothy

Moore. I can’t tell ya’ll how much she means to my family.”

Jay Sieleman, past President and CEO of The Blues Foundation became visibly teary-eyed before he was able to utter a word. With a trembling voice, Sieleman spoke about the humanitarian side of Dorothy Moore. He expressed, “She was very active as a member of the Blues Foundation board. She raised thousands of dollars. I know her as a philanthropist. She made things happen for other musicians while on the Blues Foundation board. She was a better human being than musician. We’ve gotten a lot of laughs and jokes from Dorothy Moore. Thank you for giving so much joy. I’ve had the pleasure of being at many of these Blues Trail Marker ceremonies, but please read and appreciate the words on this one. Come back and see what people think of you, Dorothy.”

Dr. Robert Luckett could hardly contain his laughter as he addressed the crowd. His facial expression exuded the joy he verbalized telling the audience his resounding yes when Peggy Brown asked him where and/or if Dorothy’s trail marker should be at Jackson State University. Luckett said, “I’m glad it’s here at JSU. The students from South Bend can exhale now. I’ve known Dorothy all my life because of my mother.”

He paused and showed the audience a picture of his mother and Dorothy that he presented to her that brought tears to her eyes. Then Luckett resumed his turn at the microphone, relaying a personal moment. “Ya’ll she sang ‘Amazing Grace’ at my dad’s funeral.” Then on a lighter note, he talked about how he, as a young white boy from the South, took Dorothy Moore’s “Misty Blue” album off to college with him saying, “It brought me comfort but really ‘Dark End of the Street’ was my favorite. I’m proud to have Dorothy Moore in my personal and professional life.”

Kamel King recognized Dorothy’s longtime past manager, Marsha Weaver, asking her to stand to a rousing applause from the audience.

Dorothy’s present-day agent and CEO of Hit The Road entertainment, Peggy Brown, said, “It is my honor and privilege to be her manager and friend. She is humble and a lot of fun. Thank God for opening up the sunshine to get us in here today. It has been a two-year endeavor to get the marker done. Thanks to Craig Ray, Kamel King, Jim O’Neal, Scott Barretta, Wanda Clark, Kim Lewis and Priscilla, Visit Jackson, and JSU for allowing us to bring the marker here. JSU is the perfect place. I want to thank all of the musicians that came here that have played with Dorothy Moore in the past and present. And thanks to Ray Neilson and his wife for sponsoring the reception.”

The four-time GRAMMY nominee Dorothy Moore received a standing ovation and addressed the crowd saying, “Hello everybody I’m so thankful for ya’ll coming out here in this weather. I love all of you. Thanks JSU for allowing me to come here.

Thanks president Hudson and Kamel King…he’s my attorney. Thanks Dr. Luckett and Chokwe for what you are doing for our city. Thanks John Horhn, and I thank all of you who have donated to the marker. Thanks Dr. Thigpen and Visit Jackson who donated money for the marker. I want to recognize Rosemary Taylor and Fern Kinney of The Poppies my first group members. Thanks to all the musicians who have played with me. Thanks Amanda Bradley and Jewel Bass, who sang background on ‘Misty Blue.’ Thanks Wolf Stephenson from Malaco Records. And Marty we had fun. I was a size six then when I was with The Poppies. Thank God. He has blessed me. Mississippi was the classroom for what I do now and The Alamo Theatre. This is such an honor for me. Thanks Marsha Weaver. We have traveled all over the world. Thanks!”

Dorothy and her band gave the crowd a special treat with three songs. The first song was a gospel song, “What Is This”, that Dorothy wanted to sing. “I want everybody to know that I love the Lord. Ya’ll can join in. I know you know it,” Moore commented. The second song was “Misty Blue” which garnered a standing ovation. Moore said, “I want to take ya’ll to Farish

Street.” Then, she surprised the audience with a Blues standard, “Let It Roll”, accompanying herself on harmonica.

Trail Marker that is permanently seated in front of the F.D. Music Hall on the campus of Jackson State University. Dorothy Moore attended there and majored in music in 1966.