Remembering ‘a man among men’ 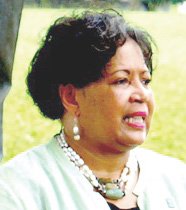 The weekend before this year’s Father’s Day weekend, Reena Evers-Everette honored her father, Medgar Evers, and the legacy that he left 58 years after he was assassinated at their family home on June 12, 1963. His tireless fight for equality and justice for Black people, especially those living in Mississippi, has touched the lives of those who walked beside him and those who never got a chance to meet him. The community and elected officials, including Mayor Chokwe Lumumba, Ward 3 Councilman Kenneth Stokes, Representative Zakiya Summers, and more were present on Saturday, June 12 to pay homage to this “Father of the Civil Rights Movement” and “a man among men.”
(Photos by Jay Johnson)

Remembering ‘a man among men’