Rally in Brookhaven calls for justice in unsolved murders

National attention was again focused on what Attorney Carlos Moore called a hate crime and attempted murder in Brookhaven a little over a month ago.

Suffering relatives of past murder victims and community activists from across Mississippi joined in fellowship Sunday with Brookhaven FedEx driver D’Monterrio Gibson who on January 24 barely escaped the gunshots of a local white father-son pair who chased him from his delivery route while firing a hailstorm of bullets at him.

Gibson’s story – a stinging reminder of the 2020 murder of Ahmaud Arbery in Brunswick, GA – ended with the targeted victim alive and safe, and willing to testify against his assailants – Gregory Case and his son Brandon Case. The three white defendants in the Arbery case were all convicted of murder in the Georgia courts and of hate crimes in their federal trial.

“We’re trying to seek justice,” Sharon McClendon, the mother of D’Monterrio, told the crowd.  “To upgrade the charges against the guys who actually shot at him and chased him out of Brookhaven. This rally is about him sharing his platform with other victims of the same injustice. And we’re allowing people to come up and speak about the injustice that is so widespread in Brookhaven.”

D’Monterrio Gibson thanked the crowd of nearly 200 Sunday for attending the “Rally for Justice”  in Brookhaven’s Bi-Centennial Park and a later fellowship at St. James Missionary Baptist Church. He reminded them, however, that although he had been fortunate, justice and full investigations are still needed for the Black people killed in Brookhaven and other parts of Mississippi in the not-so-distant past.

“I do appreciate y’all standing with me,” he said. “I want to use my voice not only for myself but for everybody else. The rally organizers said they wanted to focus on me. But there are a lot of past situations that happened. And we want to make sure they don’t happen anymore.”

Attorney Moore, president of the National Bar Association, the century-old organization that represents over 65,000 Black lawyers and judges in the U.S., said that a major part of his childhood was spent in Brookhaven, and that he had already gotten the FBI and the Civil Rights Division of the Justice Department involved. Moore questioned the police and the local district attorney’s reasons for waiting eight days after the shooting incident before taking action against Gregory Case and his son. The pair were allowed to turn themselves in but were then released on a $75,000 bond for the father and $150,000 bond for the son, Brandon Case.

“You have a right to be indignant,” Moore told the crowd that had marched the two miles from Bi-Centennial Park to St. James Church.

“We’re serving notice on those who think they’re in charge down here,” he said. “We’re not requesting justice but demanding justice.” 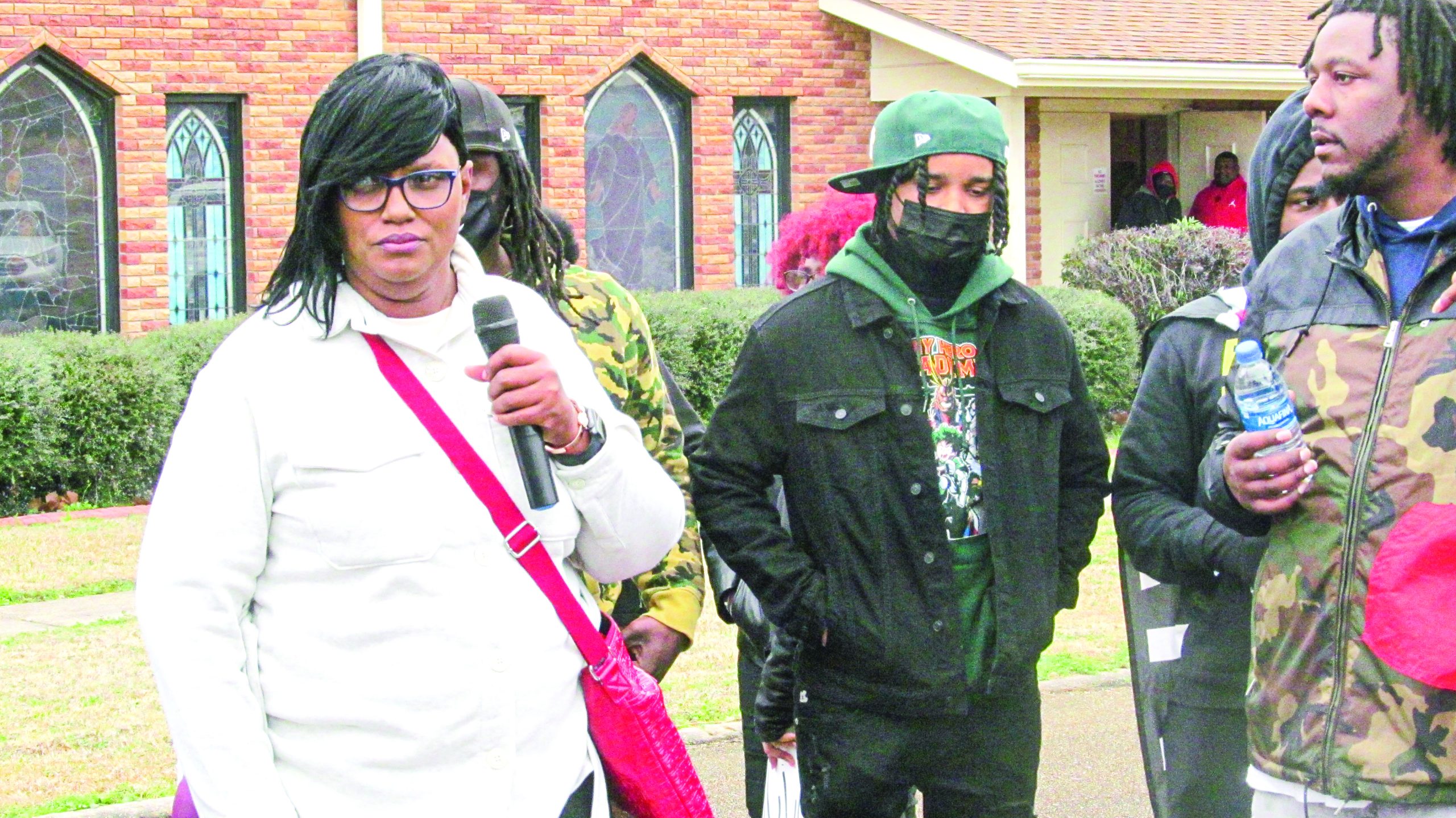 Brookhaven is a municipality of 12,000-plus with a 60.7 percent Black majority population. Several speakers at Sunday’s rally pointed out that of the 10 murders in the city’s Black community in 2015, none has been solved.

“Justice in Brookhaven sucks,” said Terasa Smith, the niece of Bridget Hall, one of the 2015 murder victims whose cases remain unsolved.

Smith said her former companion and father of her son, Greg James, was killed in his yard in 2014. That murder also was never thoroughly investigated, she said.

“No investigation, no status report. Nothing since the murder in 2014,” she complained. “It don’t make sense. They know more than what they’re saying they know.”

Standing nearby, Roy Smith, no relation to Terasa, pointed out that the unsolved murders can still be re-opened for investigation.

“There is no statute of limitations on murder,” Roy Smith said. He pointed out a murder case dating back to 1955, where a Brookhaven voting rights activist was murdered while on his way to the courthouse to register voters.

“Lamar ‘Ditney’ Smith was a community activist delivering absentee ballots to the courthouse one Saturday morning in 1955, when he encountered three white men,” Smith said. “He was gunned down on the courthouse lawn with about 30 witnesses, but nobody saw anything. As of today, neither he nor anybody in his family has gotten any justice.”

Smith said he is working with Lamar Smith’s family to have the Lincoln County Courthouse named in his honor. The group will meet in Brookhaven at 5 p.m. on Saturday, March 5, to pursue their goal, he said.

“My sister Bridget Hall was murdered in 2015 in front of her children here in Brookhaven,” Sharon London said. “And nothing has been done about it.”

The Brookhaven Police Department claimed to have attempted an investigation, she said.

“At that time, there’d been 10 murders in Brookhaven. And in her case, it was due to a young man, Kelcey Humphreys, a boyfriend, who was killed a day before her. So it was like a retaliation, supposedly. According to people here and the Brookhaven police, they did say it was because of the murder the day before in which she got caught up in the middle. It came down to retaliation.”

Elmira Gayten said her son, Julian Demarco Gayten, was murdered in Brookhaven during a home invasion the day before Christmas in 2015.

“I know who did it (She named a local woman),” Gayten said. “She wrote a statement admitting that her and two more people went there to rob my son, but not to hurt him. And even though the Brookhaven Police Department has all the evidence, they destroyed the evidence in my son’s case. And they never even called me when it happened. I never got a call from the Brookhaven Police Department.

“My son was 22. And I was constantly calling the police department to speak with them. But (former police chief) Bobby Bell had spoken with the entire department and told them not to answer any calls from me or my other son concerning my son Julian’s case.

“So, we have not gotten justice. But we deserve it. And when I read that statement where the woman said they went to the house to rob my son, and she’s still walking free, justice is not being served and I want justice.

“That was in 2015. So, this makes 7 years. And the sad thing about it is that the 10 murders that took place in 2015 under Chief Bell have been carried over into the term of Chief Kenny Collins, and nothing has been done. There’ve been no murders solved in the city of Brookhaven.”

Mrs. Nicole Trim attended the rally in the name of her late husband, Acruest Trim, who was killed by members of the Clinton Police Department outside of their jurisdiction in November 2021.

“My husband was chased into Jackson and was shot down with no explanation,” Nicole Trim said. “We live in Jackson. But we’re down here helping D’Monterrio and the people to get our story out. His platform has really helped a lot of us to get our story out and to be heard. They have given us a voice.”

Marian Tillman of Brookhaven tells of her father’s death in 2020, saying he was found dead in his home under suspicious circumstances.

“He ended up at home dead,” she said. “I have the belief that it was a foul play situation, a potential homicide. The police chief, however, rendered an opinion that there should be no autopsy or investigation into circumstances of his death. The police chief is a relative of the person I suspect was implicit in the case,” she said.

“My father and his ex-girlfriend had rekindled their relationship, worked out their differences. It ended up the following Monday – September 21, 2020  – that I got a phone call telling me that my father was deceased. And when I got to his home, everything was out of order. Nothing was in place as he would have had it. He had passed away in his bed, and she had put his body on the floor to cover up what took place.”

Two additional appeals for justice were presented in the name of the late Debbie Collins and Robert Collins of Grenada. No details of their deaths were made available at the time of the rally, however. 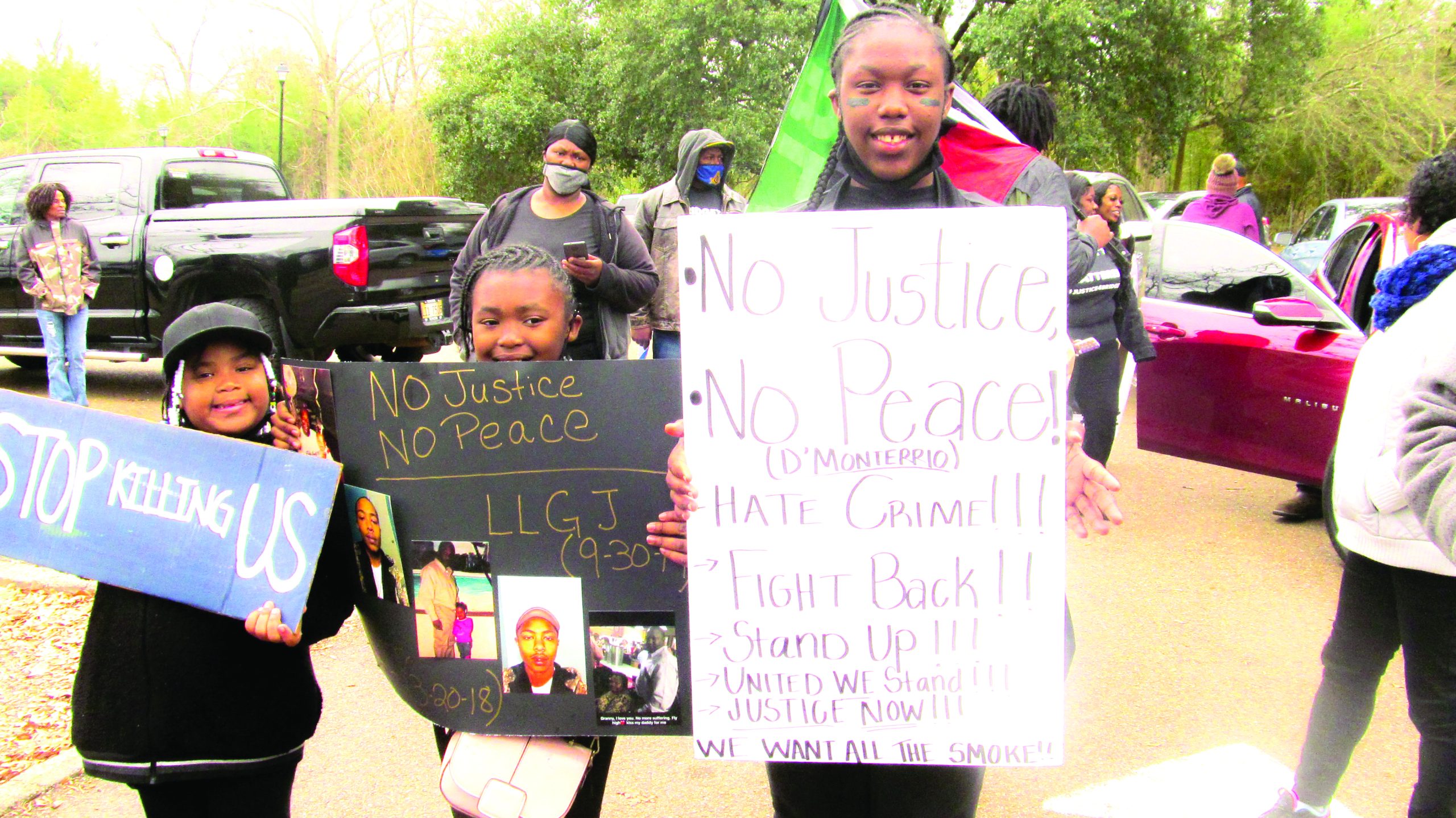 Moore denounced the local police and court authorities for not responding to the growing demand for justice among the survivors of murder victims in Brookhaven.

“Injustice anywhere is a threat to justice everywhere,” Moore said, citing Dr. Martin Luther King. “If we allow these two (Case and his son) to get away with attempted murder, while D’Monterrio Gibson survived, somebody’s child will be killed while working.”

Sunday’s rally organizer, Jeremy Marquell Bridges, described himself as a community activist who travels across the state in pursuit of justice for the people who are too frequently shut out of the system.

“I travel the state helping my people,” Bridges said. “This is about justice for D’Monterrio Gibson and all these other victims that no one cared about just because they were Black. But we do care. We have people from Gulfport, Jackson, Clinton, Grenada, the NAACP, the New Black Panther Party, our fellow activist Reginald Virgil, the Poor People’s Campaign, Mr. Steven Harris of Second Chance Mississippi, and the Black Liberation Organization out of Jackson for all of Mississippi. We are all out here. It’s the community speaking.”

Rally in Brookhaven calls for justice in unsolved murders