On a hot Mississippi summer night in 1955, near Money, Mississippi, Roy Bryant and his half-brother J.W. Milam brandished weapons and barged into the home of Mose Wright, a local sharecropper and minister. They found a 14-year-old boy sleeping with his relatives and demanded to see the boy despite the pleas of his uncle. Enraged, they forced the young Black child into their Chevrolet pickup truck.

Bryant believed the boy made a crucial violation – allegedly flirting with a white woman – against Carolyn Bryant, his wife and the owner of a small grocery store there. In one of the two accounts of the youth’s murder, the assailants spent hours riding him around, and presumably torturing the child, until they arrived at a barn in Sumner, Mississippi.  There they stripped him of his clothes and made him carry a giant cotton gin fan to the banks of the Tallahatchie River. After gouging his eyes out, they tied him to the cotton gin using barbed wire, shot him in the head, and sank his defaced body in the Tallahatchie River. Three days later, the boy’s body was found and retrieved from the river’s depths. He was so badly beaten that his family could only identify him by the ring on his finger.

That boy’s name was Emmett Till. Though his story is a tragic and somber one, his murder was one of the catalysts for the Civil Rights Movement, pushing race relations and the discrepancies in the treatment of Blacks into the national spotlight which prompted many Black Americans to mobilize and risk their lives in the pursuit of equality in the South.

After receiving word of her son’s demise, Mamie Till-Mobley insisted that her son’s body be transported to Chicago. The same train that he traveled to Mississippi on was the train that carried his remains back to Chicago. Concealed in a pine wooden box, Till’s body was received by his mother and a large crowd of Chicagoans. Mississippi officials had a signed agreement that the casket be sealed. Suspicious of why the casket was ordered to be sealed, Ms. Mobley desperately wanted to see her son, exclaiming “Well, give me a crowbar, give me whatever. What can they do to me? They’ve taken my son.”

What Mamie Till-Mobley saw after she opened that pine box would alter the fight for civil rights in America and set the world ablaze with shock and awe. Her decision to hold an open-casket funeral carried out her intentions to show the world what racist murderers had done to her son.

The funeral service was held at Roberts Temple Church of God in Christ in Chicago, Illinois. Till’s body was on display for five days while tens of thousands of people gathered to pay their respects and to view the evidence of the crime first hand. Images of Till’s mutilated corpse quickly circulated across the country in notable Black publications. The heinous actions of Bryant and Milam uncovered the barbarism of lynching and the vulnerabilities of American society were exposed. The open-casket viewing of his mangled and badly-mutilated body are images that are entrenched in the psyche of all Americans from that era and even now. 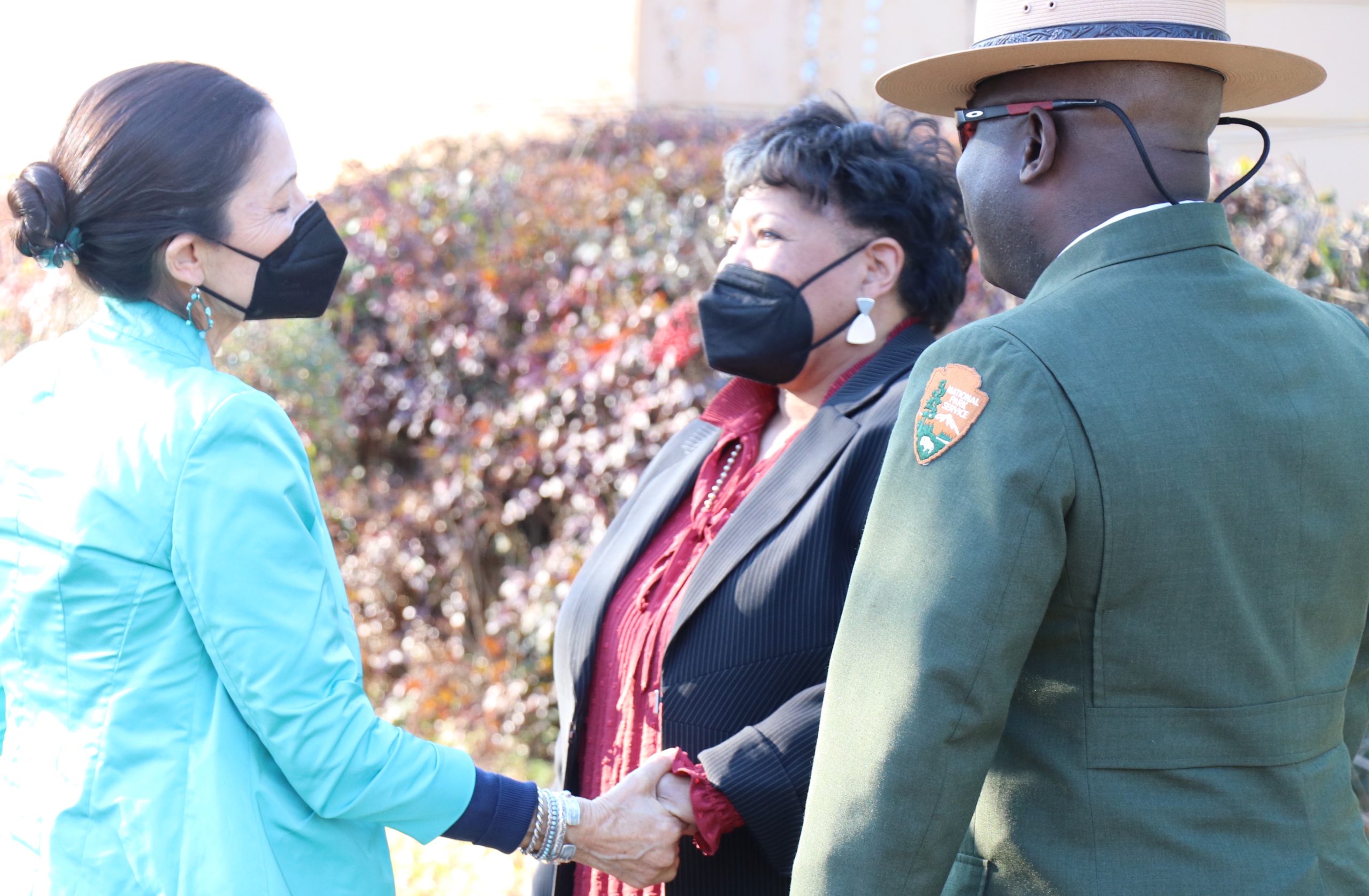 The memory of that Mississippi summer night and its aftermath have been immortalized by museums like the Emmett Till Interpretive Center in Sumner, Mississippi. Sumner is where Till’s body was found in the Tallahatchie River. It is where his body stayed until it boarded the train bound for Chicago. And it is the place where the infamous trial that acquitted Bryant and Milam of all charges took place.

The center was founded after Jerome G. Little, one of the first Black supervisors for Tallahatchie County, created the Emmett Till Memorial Commission in 2006 – just a little over 50 years since Till’s death. “The ETMC, made up of a multi-racial group of citizens, realized that in order to properly remember and honor Emmett Till, they needed to first break the silence and take responsibility for their role in the injustice. In 2007, the ETMC offered a formal apology and delivered the apology to the Till Family in a public ceremony in front of the Sumner Courthouse.

​“The ETMC knew that the apology would be meaningless without action. Over eight years, the organization worked across racial lines to restore the Sumner Courthouse back to its condition during the 1955 trial of Emmett Till’s murderers and to create an Emmett Till museum to live out the first line of the apology, which reads, ‘Racial Reconciliation begins by telling the truth,’” states the center’s website.

Yet, there is a second account of Till’s murder with a few significant changes in events that many are fighting to keep alive. The Emmett Till Historic Intrepid Center (ETHIC) in Glendora, MS is the former site of the Glendora Cotton Gin where the fan and wire that were used in Till’s murder were supposedly stolen from. The village of Glendora is also the home to approximately 18 signs dedicated to the memory of Till, and it houses the Black Bayou Bridge where Emmett Till’s body was said to have been dropped in the water after he was beaten. It is said that Till’s body then traveled over three miles to the Tallahatchie River where he was found.

There is now a campaign to create the Emmett Till and Mamie Till-Mobley National Historic Park in Sumner, Mississippi, but 12 miles south, members of the Glendora, Mississippi community would like to install the national park there. Although it may be of no consequence, the Emmett Till Interpretive Center was co-founded by Patrick Weems and the ETHIC museum was founded by Johnny B. Thomas. Even in the preservation of history, civil rights is divided along racial lines.

During a February 15, 2022 visit, Congressman Bennie Thompson invited the Secretary of the Interior, Deb Haaland, along with White House Council on Environmental Quality Chair Brenda Mallory, to Mississippi to tour civil rights sites, which included the aforementioned museums. One of the Secretary of the Interior’s main roles is to preserve and name national sites across the country.

While addressing Glendora community members, along with Thompson and Haaland, Jaribu Hill, executive director of the Mississippi Workers’ Center for Human Rights, said, “That boy’s life ended in a swampy grave. This is where it happened. That’s why the story needs to start where it happened…The site of the national park should be Glendora.”

She continues, “It’s important that we not think about only the economic issues, because you’re looking around and you’re seeing an area that is blighted because of the inequities that have been experienced across many years.”

According to Dr. Dave Tell, a University of Kansas professor who wrote the 2019 book “Remembering Emmett Till,” “Glendora is marked by breathtaking poverty. In an application for federal assistance, town officials noted that the Glendora median household income is 70% below the state average, 68% of families live below the poverty line, and just 18% of the adults have earned a high school education.”

In 2017, Glendora Mayor Johnny B. Thomas, who also heads the ETHIC museum, comments in his book, “A Stone of Hope: Rising Above Slavery, Jim Crow, and Poverty in Glendora, MS,” that “ 86% of children in the village live below the poverty line. Partners in Development, a nonprofit committed to helping the poorest of the poor, has chosen to focus on Haiti, Guatemala, and Glendora, Mississippi.”

Much of the money that has been poured into Mississippi, in regards to honoring the legacy of Emmett Till, landed in Sumner. The MS Department of Archives and History designated the Tallahatchie County Courthouse, the site of the trial, as a state landmark in 1990, and the ETMC raised over $3 million – from 2007 to 2015 – to restore it.

Ben Roy’s Service Station, which sits across from Bryant’s Grocery, is owned by Harry and Martin Tribble and Annette Morgan, the children of Ray Tribble who was a juror in the Till trial.

Though the site has no ties to Till’s story, its proximity to Bryant’s Grocery allowed the Tribble siblings to apply for civil rights restoration grant funds. The siblings received $200,000 from MDAH to restore the service station in 2011.

They also own the grocery store and asked for a whopping $40 million from Leflore County officials in 2006. According to the Greenwood Commonwealth, when the counter-offer of $50,000 was made, the sum went from $40 million to $4 million. Since at least 2018, that number still stands as the grocery store continues to crumble.

Secretary Haaland, who is the first Native American to serve in that capacity, also traveled to Mound Bayou, which is listed as a historic district on the National Register of Historic Places. It is the only Black town created and governed in Mississippi since its inception in 1887. It was also the home of Dr. T.R.M. Howard, a national civil rights leader in the Delta who shared his home to provide a safe haven for Till’s mother and others during the trial.

Their final stop was the home of the late Medgar Evers, which is a national monument located in Jackson, MS. Medgar Evers’ assassination heightened the public awareness of the many dangers Black Americans faced in this country. Evers’ death, along with Till’s, are synonymous and can be described as the driving forces behind the eventual passage of the Civil Rights Act of 1964. Reena Evers-Everette, the daughter of Medgar, was embraced by Haaland and other officials highlighting a partnership between the National Park Services and local communities.

For certain, preserving history and accurately telling the stories of Black civil rights leaders and events is paramount in the continued fight for justice in today’s society. Sixty-seven years after Till’s murder, his family and community members are still asking for justice – the same justice that Medgar Evers family was able to receive in 1994 with the conviction of Ever’s murderer Byron De La Beckwith.

The brutality of the Till murder and the fact that the white perpetrators involved were acquitted of all charges has been well-documented and in fact made Till a posthumous icon for civil rights. In 2017, a book, entitled “The Blood of Emmett Till” by Timothy Tyson, revealed that Carolyn Bryant recanted her testimony. According to Tyson, Bryant admitted that Till had never touched or harassed her. Yet, the Department of Justice recently closed a reopened investigation into the murder after it was unable to prove the claims that Bryant recanted her allegations.

Writer and philosopher George Santayana’s quote, “Those who cannot remember the past are condemned to repeat it,” is apropos. And it mirrors Jaribu Hill’s sentiments. “The story is brutal. But inside of that brutal story, there is a reckoning and there is justice. If there is ever going to be justice, then we need to start with locating our history, locating our story where it started.”