It is tragically ironic that the city of Buffalo, where 10 unarmed Black citizens were murdered in cold blood on May 14, is the same place where Black Americans were first united in their call for a war against slavery in August 1843.

The late Hari Jones, former curator of the African American Civil War Museum in Washington, said Henry Highland Garnet’s “Call to Freedom” at the National Negro Convention of August 15, 1843, spurred the 75 delegates into action to spread the words of defiance to Black people across the nation.

“Brethren, arise, arise!” Garnet called out to the four million Black people across America. “Strike for your lives and liberties. Now is the day and the hour. Let every slave throughout the land do this and the days of slavery are numbered. You cannot be more oppressed than you have been – you cannot suffer greater cruelties than you have already. Rather die free men than live to be slaves.”

Twenty years later, in May 1863, the first 10 regiments of the African Brigade would be sworn in officially as the United States Colored Troops, eventually growing to 175 Black regiments and a total of 208,000 soldiers and sailors.

Over 50,000 Black men died in service to the United States in the Civil War. And the largest number of Black Civil War heroes buried in one place – 7,240 – are resting in the National Military Cemetery in Vicksburg.

When the Civil War broke out on April 12, 1863, although several hundred thousand Black men and women were anxious to join the war effort, American law prohibited them from participating. A law passed by Congress in 1792 explicitly barred military training for Black men, although the Navy was allowed to use them as stewards and domestic servants.  It was only after the passage of the Militia Act of 1862 and the Second Confiscation Act of that same year that President Abraham Lincoln could legally allow Black men into the military.

Jan.1, 1863, was anticipated like a major holiday as the promised date of Emancipation approached. With Emancipation on Jan. 1 also came the right to enlist in the military for Black men.

The first 10 Black regiments were authorized for the Mississippi Valley in April and May of 1863. After the installation of two regiments (referred to by their French names, “Corps d’Afrique”) in Louisiana, the First Mississippi (African Descent) regiment was recruited at Milliken’s Bend, across the River with most recruits coming from Vicksburg.

The fall of Vicksburg, once heralded by Lincoln as the key to victory in the war, on July 4, 1863, opened a new world to the Black soldiers, their families, and their old oppressors, the white people who were now forced to live with them on an equal plain.

While some of the secret Black militia worked with white abolitionists and the Black advocates of African colonization, they kept their war preparations a secret, according to curator Jones. John Brown, in their eyes, was a “captain” and not a “commander” in the secret Army, Jones said.

It was Jones who shed light on the defiant and formidable Abraham Galloway, a former slave who became a master Union spy. Galloway was called the “Black Scarlet Pimpernel” by one writer and was reported as having a network of 10,000 other Black men who were prepared for war duty before the Civil War began. Galloway was also in contact with the escaped slaves in the area near Vicksburg and the trans-Mississippi area of Louisiana before Grant and Sherman shifted their base of operations to Milliken’s Bend. He most likely provided a substantial amount of the intelligence Grant needed for the Siege of Vicksburg, and he was back in Washington as the long Vicksburg campaign unfolded.

“Galloway is like the super-secret agent who travels from North Carolina to the Mississippi River Valley, gets captured by the Confederates, escapes, takes on two, three men at one time,” Jones said. “He’s that kind of a guy, but he’s almost unbelievable because he’s been left out of the narrative for so long.” 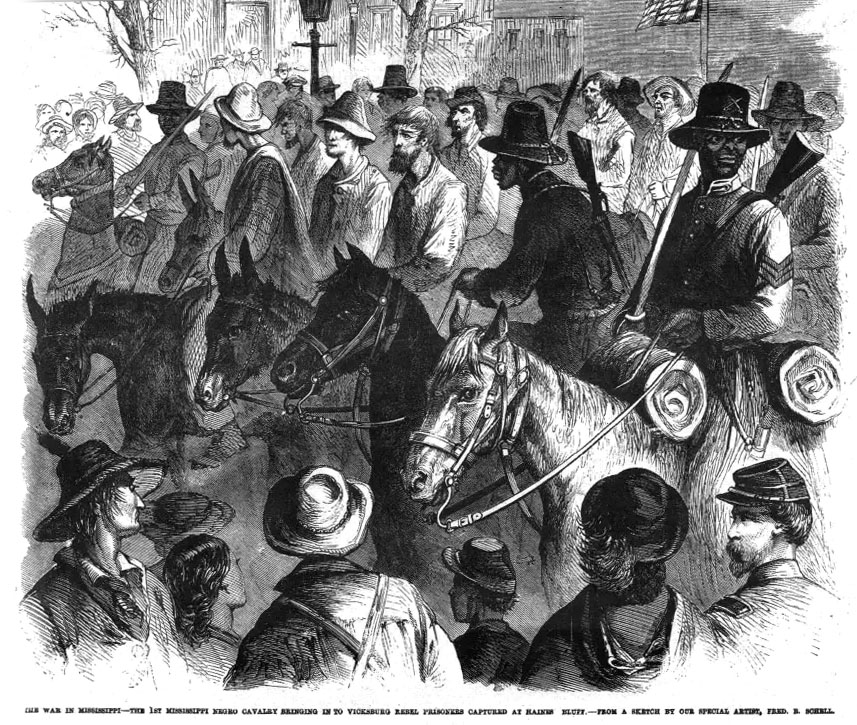 If Jones’ narrative of the spy mastery of Galloway is correct, then it is very likely that the formation of the first ten Black regiments in April and May 1863 was based, in large part, on his spy reports. Grant’s top generals had moved into the Milliken’s Bend post in early December 1862 and Grant joined them there in late December or early January 1863, long after Galloway had made his reports about the area.

Grant’s decision to go south along the banks of the Mississippi instead of re-deploying to Memphis in his attempt to capture Vicksburg is considered one of the most brilliant moves in military history. But if there had been no Abraham Galloway and other Black men and women with firsthand knowledge of the geography surrounding Vicksburg, Grant’s decision and the outcome of the war might have been different.

Although the First Mississippi, the white 23rd Iowa, and the two other Black regiments forced to engage the Confederates at Milliken’s Bend suffered the loss of more than half their number, they won the battle and put a lie to the false idea that Black men would not fight in a serious war setting.

Respected Black historian Benjamin Quarles gave his highest praises to the First Mississippi and their comrades at Milliken’s Bend.

“Milliken’s Bend was one of the hardest fought encounters in the annals of American military history,” he said.

Assistant Secretary of War Charles A. Dana, an official observer on duty in the war zone, said the battle was a major turning point for Blacks in the military.

“The bravery of Blacks at Milliken’s Bend completely revolutionized the sentiment of the army with regard to the employment of Negro troops.”

The First Mississippi, while stationed at Lake Providence through May 1863, was redesignated as the 51st USCT on March 11, 1864. The 51st moved about from Louisiana back to Vicksburg, then to Florida and Alabama. The regiment was eventually decommissioned, and the last troops mustered out in June 1866.

While the First Mississippi Colored Cavalry was organized on October 9, 1863, months after the capture of Vicksburg, it played a much greater role in the war than did the First Mississippi infantry. This regiment received high commendations for its involvement in “one of the most daring and heroic acts of the Civil War.”

The Union troops were unable to disrupt the Confederate railroad supply line that crossed the Big Black River near Canton, MS.

“It was well known by the district commander that the bridge could only be taken by the most determined bravery and sacrifice of many lives,” Major General E. R.S Canby said in his official report on December 9, 1864 (General Orders No. 81).

“Catching the inspiration of their officers, the Black troopers swept on with irresistible force. Pierced with bullets, men reel on the dizzy heights and fall with a splash into the murky waters below. The survivors reach the opposite bank. The battle cry of the Third Cavalry rose above the din of the conflict. They close in on the enemy. Through the sally ports of the stockade, they fight their way. A mighty shout rends the air. The enemy, in terror, flees to the shelter of the swamp. The victory is complete. The Third Cavalry has written its name high up on the roll of fame. It has passed through the crucial test emerging as tempered steel.”

Canby said this was but “a faint glimpse” of the heroic record of the Third Cavalry.

“This, comrades, is the common heritage of the surviving members of the regiment. It is yours to keep, defend and cherish and to transmit to your children.”