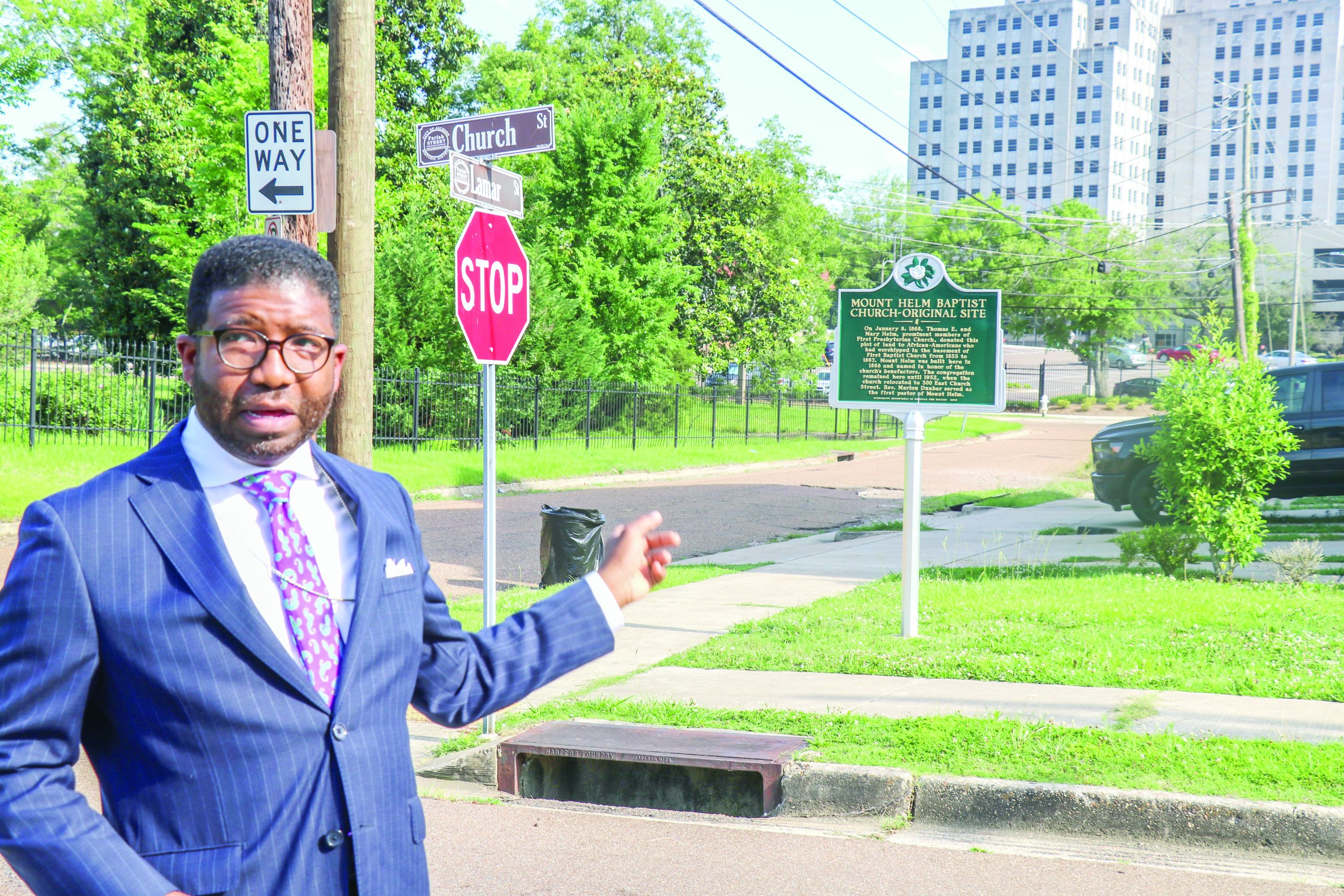 Mt. Helm Baptist Church and the Word and Spirit Baptists Alliance joined members of the clergy, elected officials, and community leaders to commemorate the 125th anniversary of the Holiness Revival on June 7, 2022. Born out of this revival was the Holiness Movement, underpinning the concept of the Holy Spirit for many denominations and churches, notably the Church of Christ Holiness USA (COCHUSA) and the Church of God in Christ (COGIC).

Mt. Helm Baptist Church, now under the direction of Reverend CJ Rhodes, is the first and oldest Black church in Jackson and has celebrated over 185 years. Michael Morris, director of public engagement for the Mississippi Department of Archives and History, notes that MDAH is dedicated through a new initiative to “strengthen the relationships with religious institutions…to commemorate their history and preserve their stories for future generations.”

Mt. Helm’s inception began at Jackson’s First Baptist Church in 1835. Enslaved African Americans worshiped with their respective plantation owners, and in 1843, they were able to use a space in the basement of the building for worship. After the Civil War ended in 1865 and the 13th Amendment, which abolished slavery, was ratified in 1867, Mt. Helm’s first leader, Reverend Marion Dunbar, and the Black members left First Baptist Church to start their own church.

Furthermore, Mt. Helm is the birthplace of Farish Street Baptist Church, Koinonia Baptist Church, and Cade Chapel Baptist Church in Jackson. However, it is most noted for its role – as the “Mother Church”, according to Rev. Rhodes – in the Jackson Holiness Movement.

the father of the Church of Christ (Holiness) U.S.A. (COCHUSA) denomination. Jones was the 5th pastor of Mt. Helm where his time there served as “a crucible for a moderating view between progressive learning and conservative burning,” said Reverend CJ Rhodes in his 2020 book Deeper Still.

“He believed that our church and our state was in such a crisis that we needed something revolutionary,” expressed Rhodes.

In 1896, Jones, along with others, conducted a widely attended revival in Jackson, and the next year – on June 6, 1897 – they held a two-week Holiness Convention at Mt. Helm. At that time, Jones sought to lead the Baptist faith into a spiritual transformation, but the social and political beliefs of the Black Baptist community at the time was shifting in the opposite direction. Jones was later ousted from his position, and in 1897, he founded the COCHUSA faith and took approximately 400 members of Mt. Helm’s congregation with him to what is now Christ Temple COCHUSA. 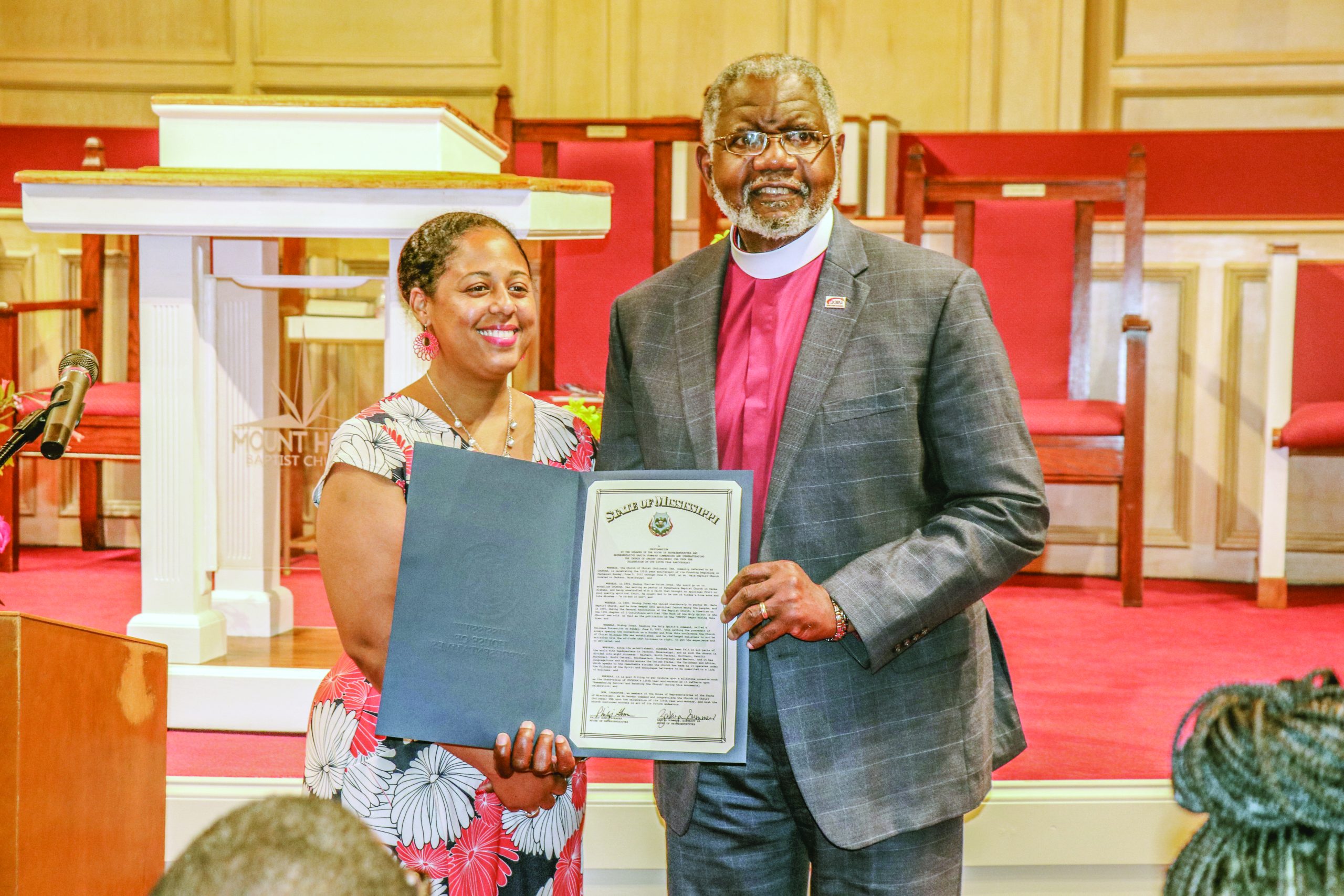 MS House Representative Zakiya Summers (District 68) presented a resolution at the commemorative event and talked about the importance of the Holiness Movement. “Who knew that the Lord would make this day, 125 years later, to allow us to celebrate such a historic moment. I’ve been a member of Church of Christ Holiness USA pretty much for all of my life. People may say, ‘Why is it that you do what you do?’ and I say it’s because the Holy Spirit is in me and I’m very thankful for COCHUSA for teaching me and guiding me to be that.”

Senior Bishop Vernon Kennebrew, of South Central Diocese of COCHUSA, accepted the resolution. He commented that, since 1897, COCHUSA has grown to include 22 districts, 8 diocese, and approximately 135 churches that reach to places like Honduras, Dominican Republic, and Puerto Rico.

During his first year as pastor, CP Jones met a kindred spirit in the form of Rev. Charles Harrison Mason. They both believed in sanctification through the power of the Holy Spirit which makes up the basis of Holiness. After the revival and split from Mt. Helm, CP Jones remained in fellowship with Rev. Mason and appointed him and others to sojourn to the 1907 Pentecostal Azusa Convention in Los Angeles, California. Mason was forever changed by what he witnessed at the event, and this would begin the amicable split between him and Jones, leading to the founding of COGIC.

Bishop Daniel Littleton from the Mississippi Southern First Jurisdiction of COGIC was present at the occasion. Those present at the event later walked down to the Christ Temple COCHUSA to pray on the steps in unity, harkening the moment of honoring the convergence of the Baptist, COCHUSA, and COGIC faiths to the illustration of the Sankofa bird which represents the saying, “go back to the past and bring forward that which is useful.”