MISSISSIPPI’S OVERLOOKED COVID-19 THREAT: Families with many generations under one roof

Last spring, she lost her job in Texas. So Fuller and her son quickly moved back to Jackson and closed them-selves off to outsiders.

Fuller now lives with her mother, 58, who works outside the home and is potentially exposed to the virus. She only goes out when it’s necessary, and she’s enrolled her 11-year-old in virtual school to limit his in-teractions with people outside the home.

A Center for Public Integrity analysis of every U.S. county shows that people of color — like Fuller — are far more likely to live in the same home as older relatives. About 18% of all U.S. house-holds are multigenerational, but the percentages are much higher among communities of color: 30% among Latinos, 25% among Asians, and 24% among Black families, com-pared to 15% for non-Latino white households.

The pandemic’s devastation has shown that communities of color are also at higher risk for infection and COVID-19 death. Health experts recog-nize that multiple generations living in close quarters has played a role.

“Inside-the-home transmission is what has been killing so many older people of color,” said Dr. Ashish Jha, a leading global public health expert and dean of the Brown University School of Public Health.

On March 15, after prioritizing the elderly, people with high-risk medical condi-tions, and frontline workers, Mississippi announced that residents 16 and older would be eligible to sign up for a vaccine appointment. That’s allowing Fuller, 35, to start trying for a time slot.

Fuller is Black, as is 38% of Mississippi’s population. Although Black residents account for roughly 39% of COVID-19 deaths, the state estimates they make up only 28% of those vaccinated through March 22.

“Within that racial disparity, there is a multigenerational reality where there are families that either live together or are in proximity or interacting often,” said CJ Rhodes, pastor of Mount Helm Baptist Church in Jackson, where the Fullers attend services virtually.

To get a sense of the extent of such households nationwide, Public Integrity analyzed U.S. Census Bureau data, identifying homes with at least two generations of adults — such as parents and adult children — and families like the Fullers, which extend from grandparents to grand-children.

The analysis found that two states with high-priced housing, California and Hawaii, have the highest proportions of multigenerational households, at 24% and 23%, respectively. In numerous counties throughout the country, the percentages are even higher. At 19%, Mississippi ranks seventh among states.

Millions of Americans and immigrants live in these households to suit elders’ needs, for cultural reasons, or because it’s more affordable.

It’s not coincidental, health experts say, that ethnici-ties with elevated rates of multigenerational homes have suffered from COVID-19 at greater rates than their white counterparts of all ages. As a whole, people of color often have less access to health insurance and higher rates of health problems that make COVID-19 more deadly.

Among people ages 55 to 64, Black and Latino death rates are at least five times higher than for white people, according to the Brookings Institution, which analyzed CDC data.

Jha agrees with other spe-cialists that after the elderly, vaccinating essential workers, from teachers to farmworkers, is crucial to stop the spread of the virus. But early vaccination of essential workers alone “probably is not enough,” Jha said. “We really do need to find ways to prevent the intergenerational spread of the infection in these households.”

In general, people who are 65 or older account for eight out of 10 COVID-19 deaths. But the age limit has cut out younger people of color, many likely to live in multigenerational households, who face disproportionate risks compared with white peers. That’s why Jha, the Brown University expert, recommended in February that states lower the limit to 55 to better reach vulnerable communities.

President Joe Biden wants all adults to be eligible for vaccines no later than May 1. But it’s been left to individ-ual states to determine who should be prioritized in the meantime.

Earlier this year, Fuller struggled for weeks to schedule a vaccine appointment for her grandparents when the elderly were given priority access to vaccines. At one point, her grandparents, 86 and 87, waited in line for hours at a clinic in Jackson, she said, but were turned away for lack of vaccines. They finally got shots in February. Her mother, Arva, will take her second dose in April.

But the whole family is still fearful, especially as variants of the virus circulate that may be partially resistant to the vaccine.

“Those are my grandpar-ents,” Fuller said. “They took care of me, so it’s my time to take care of them, and I want them around as long as possible.”

Washington state nursing home social worker Sang Nguyen has struggled to protect his family, too. But early this year, his family saw glimmers of hope on vaccine access. On Jan. 6, Washington became the first state to put multigenerational households near the top of its COVID-19 vaccine priority list.

Nguyen lived in constant fear last year that he’d bring COVID-19 home to his teen siblings, parents, and 78-year-old grandmother in the city of Puyallup. He knew from his job how deadly the coronavi-rus could be for older people with pre-existing health conditions.

While his family was able to stay home, Nguyen, 25, had no choice but to report to work. He tried to avoid in-fecting his family by entering 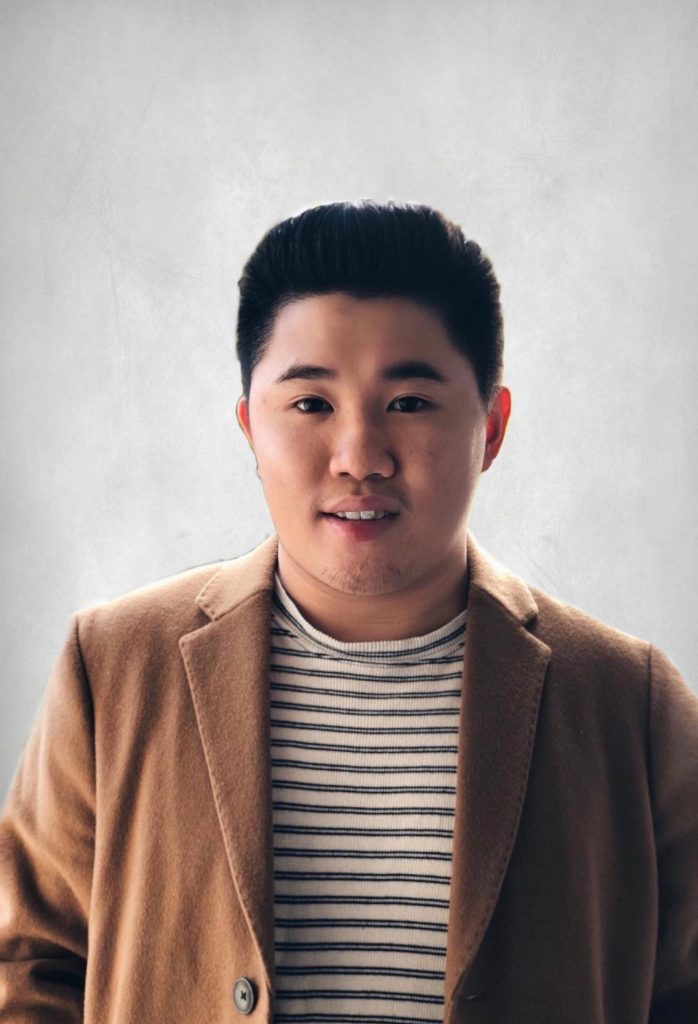 Nguyen lived in constant fear last year that he’d bring COVID-19 home to his teen siblings, parents, and 78-year-old grandmother in the city of Puyallup. He knew from his job how deadly the coronavi-rus could be for older people with pre-existing health conditions.

While his family was able to stay home, Nguyen, 25, had no choice but to report to work. He tried to avoid in-fecting his family by entering his house after work through the garage, taking off his clothes to disinfect them and immediately showering.

“I felt like COVID was truly consuming me,” Nguyen said of the strain.

Like other states, Washington followed federal guidance and first priori-tized “high risk” healthcare workers, first responders, and nursing home residents. But it  broke new ground when it next prioritized people 70 or older and those in multi-generational homes who are 50-plus and either providing care to relatives or receiving care.

The Washington rollout hasn’t always been smooth, according to some activists representing communities of color who pushed for it.

Nguyen was able to get vaccinated before resigning from his nursing home job in February. His grandparents and parents were eligible weeks later as members of a multigenerational household. Several appointments they made were cancelled, how-ever, and it wasn’t until mid-March that they were finally able to get their shots.

Last summer, a federal advisory group tasked with developing plans for fairly distributing the vaccine acknowledged the special concerns of multigenerational families. The advisers suggested that local officials have latitude to vaccinate entire households regardless of age if experts thought it would be more efficient and equitable.

Knowing that vaccine would be in short supply initially, Centers for Disease Control and Prevention advisers recommended Dec. 1 that vaccines first go to health-care workers and residents of long-term care facilities where outbreaks had been so deadly. The CDC also issued a statement suggesting that as vaccine supply increased, it was open to future recom-mendations prioritizing mul-tigenerational households.

At least three other states — Alaska, Minnesota, and Oregon — have adopted ver-sions of Washington’s policy.

Could Mississippi do this?

The South is home to large proportions of Black multi-generational households, especially in Hinds County and the Mississippi Delta, where about 17% of Black households are in this category.

In Bolivar County, 22% of households across races are multigenerational, according to Public Integrity’s analysis. At least 1 in 6 residents have contracted COVID-19.

Officials with the Mississippi Department of Health didn’t address if they had considered a multigen-erational vaccine approach, but said in a statement: “We continually monitor our data to see how well we are reaching populations to adjust our efforts as necessary and able to reach vulnerable popula-tions.”

Jeanette Ollie, 52, lives in Bolivar with her husband, adult son, and three grandchildren. For the last year, she’s managed to keep her household COVID-free by staying away from people who socialize in groups, even those who are family. Several relatives contracted the virus in January, she said, and spread it within their households.

Prior to the pandemic, fibromyalgia, arthritis in her spine, and nerve damage caused by diabetes were already keeping Ollie indoors most of the time. Now, she spends her days helping her grandchildren, ages 12 to 16, with their les-sons for virtual school.

But even as Mississippi expands eligibility for vaccines — putting it in a better position to vaccinate entire families — it faces another struggle.

Ollie is among those reluctant to get a vaccine. Although experts have repeatedly vouched for those the federal government approved, she believes they were rushed and doesn’t trust publicly released information about their effectiveness.

She said she’s especially worried about her grandchildren.

“If I don’t trust my life with it,” Ollie said, “I’m not going to trust their life with it either.”

Earlier this week, Mississippi Gov. Tate Reeves told reporters that the state has to work hard to encourage reluctant residents to get innoculated. The state is focused on communicating that vaccines are safe. Trials were expedited, he said, but the vaccines received standard approvals. “The reality is,” Reeves said, “we’ve got to all redouble our efforts at education.”

This story was co-published in partnership with the Center for Public Integrity, a nonprofit news organization in Washington, D.C. The Mississippi Center for Investigative Reporting is a nonprofit news organization that is exposing wrongdoing, educating and empowering Mississippians, and raising up the next generation of investigative reporters. Sign up for MCIR’s newsletters at https://www.mississippicir. org/sign-up.

MISSISSIPPI’S OVERLOOKED COVID-19 THREAT: Families with many generations under one roof