Communications teams from all five Historically Black Colleges and Universities (HBCUs) in Mississippi have stated in various reports that they have received bomb threats on February 1, 2022, the first day of Black History Month.

Tougaloo College, a private institution of higher education, lauded for being the “Cradle of the Civil Rights Movement in Mississippi” received a threat on Tuesday morning and announced that “due to [the] bomb threat, the campus will operate virtually.”

The campus has been cleared and no in-person classes or activities are permitted. Students and faculty will not be allowed to commute to the campus today, and faculty and staff will work remotely.

Tougaloo alumnus and Chairman of the Committee on Homeland Security, Rep. Bennie G. Thompson (D-MS), released the following statement on news that several Historically Black Colleges and Universities reported bomb threats for a second day in a row.

“The spate of bomb threats against Historically Black Colleges and Universities (HBCUs) in recent days is incredibly disturbing and disheartening. It is not lost on me that these threats are targeting African American educational institutions at a time when we are observing Black History Month.  Moreover, this rash of threats against HBCUs put further strain on campuses and communities that were already under great stress, as they try to operate safely during the pandemic,” states Thompson.

Dr. Reginald Buckley, another Tougaloo graduate who is also the current president of the General Missionary Baptist State Convention of Mississippi, Inc., says, “As the church has long been a sanctuary for the souls of Black people in America, likewise the HBCU campus has served as a sanctuary of sorts for those students, faculty and staff persons who sought space for creative genius and inquisitive intrigue to be nurtured.”

He continues, “It must not be ignored that this threat happened at the beginning of Black History Month. While some would propose that we change how history is taught in Mississippi, let this moment be a reminder that the reason we study and teach history in all of its ugly complexities is to prepare Mississippi’s youth, our future leaders, to make our beloved state more hospitable to everyone regardless of the color of their skin.”

Jackson state received a bomb threat at 4:15 a.m. Tuesday morning and will remain open with a heightened law enforcement presence due to a comprehensive sweep of the campus by the Jackson Police Department and the JSU Department of Public Safety. 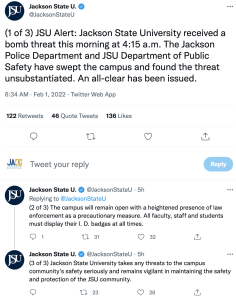 All Alcorn State University campuses are now closed but on-campus students will be able to receive food from the dining hall at respective times. 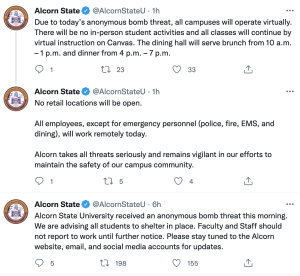 Local law enforcement and campus police have cleared any threat from Mississippi Valley State University. Classes are virtual and normal operations will resume on Wednesday, February 2.

Rep. Thompson also expressed, “These bomb threats against HBCUs deserve a full investigation, particularly given the dynamic terrorism threat landscape. I have engaged with the FBI and DHS about these threats to HBCUs and am committed to working with HBCU leaders to get them the answers they deserve.”

Dr. Buckley ended his statement with the notion that “Black colleges and universities matter. Let us all resoundingly declare this, and do all we can to protect and preserve these national treasures.”

Stay tuned for more updates on this developing story.