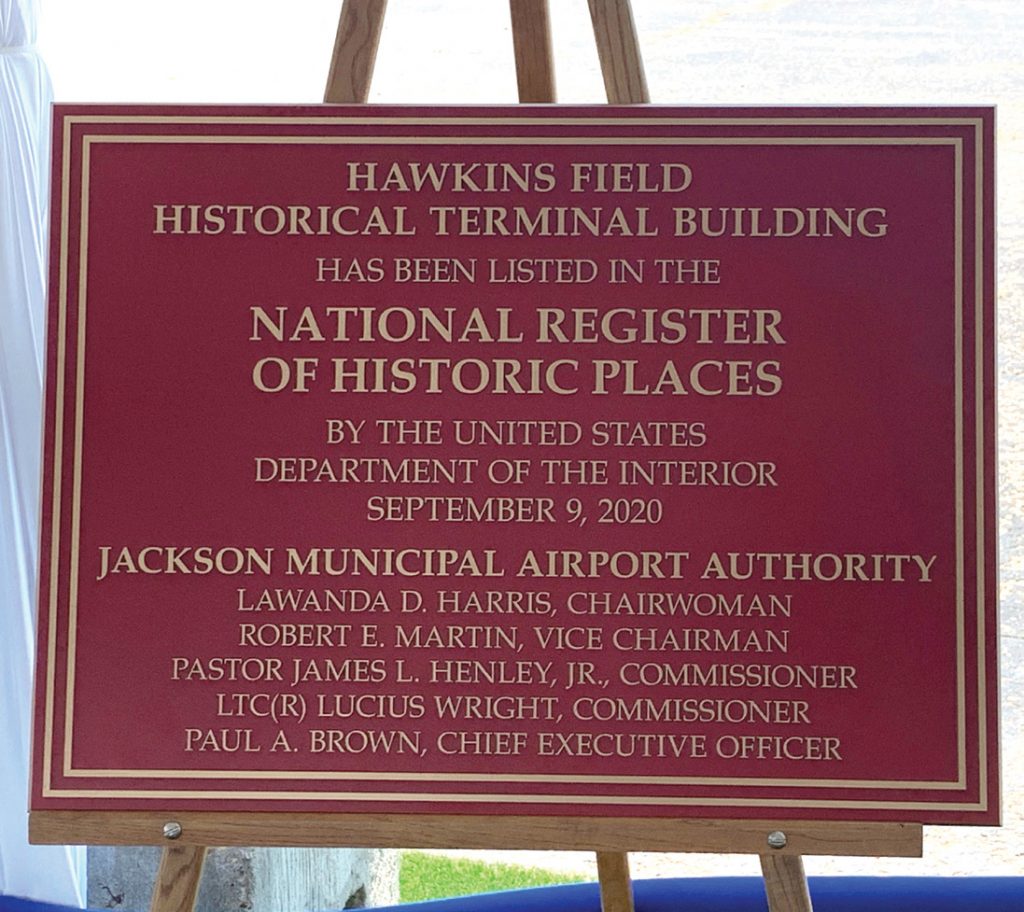 After 92 years of providing excellent air service in Jackson, MS, Hawkins Field Airport (HKS), formerly known as Davis Field, has been added to the National Register of Historic Places by the U.S. Department of the Interior. On Thursday, June 17, 2021, the Jackson Municipal Airport Authority (JMAA) celebrated the auspicious occasion with an official unveiling ceremony at the Hawkins Field Old Terminal Building.

The ceremony was well attended by the City of Jackson, JMAA, and HKS business and civic leaders; federal, state, and local governmental dignitaries; as well as members of the media.

“This occasion recognizes history,” said Mayor Chokwe A. Lumumba. “This is our opportunity to showcase this building in its true glory. This is economic development for adding another terminal for people who want to see this history, and the flight lessons that will be taking place here – it’s not only an opportunity to grow, but it also gives them a vision of opportunity that we have to restore in every community and every household.”

“We want the world to know that what we are doing here is significant,” said Robert E. Martin, JMAA Board Chairman. “We have so many things planned for this hallowed ground. And this is the right time to be in Jackson, as at our airports, we’ve ended up better coming out of the pandemic than going into it.”

“This is a very important occasion, a memorable occasion,” stated Paul A. Brown, JMAA CEO. “A building that has served this nation proudly for many years now rises to take its place in the pantheon of historic places in our valued country. This was the start of Jackson being connected to the world and, by association, the world being connected to Jackson.”

The Mississippi Department of Transportation, Central District Commissioner Willie Simmons was the guest speaker, sharing the importance of this monumental occasion. “The Department of Transportation is always very excited when we can be involved in these kinds of activities,” said Commissioner Simmons. “The future is bright. It’s even brighter because not only can we fly corporate America through this airport, but we are also training for the future.”

The unveiling of the official National Historic Marker was led by Mayor Lumumba and federal, state, and Jackson area officials, followed by the unveiling of the National Register of Historic Places solid brass plaque, led by Brown. The plaque will be affixed to the Old Terminal Building.

JMAA Board Commissioner, LTC (R) Lucius Wright, Ed.D. shared the “crown jewel’s” (HKS) humble beginnings over ninety years ago. HKS’s legacy and historic significance is a gem worth preserving for the history of aviation.

In 1929, HKS hosted Delta Air Lines’ inaugural passenger flight from Dallas, TX. In 1941, HKS was designated as a U.S. Army Air Base, and the facility was used as a pilot training center. During some of that time, the Royal Netherlands Air Force utilized the base after Nazi occupation in Europe. In 1949, it reverted back to civil aviation status.

JMAA Board Vice-Chairwoman, LaWanda D. Harris, RN, BSN, MSHA, noted that in 2009, $350,000 was earmarked by Congress (proposed by Senator Roger Wicker) for the initial repairs on the facility as part of a “Save America’s Treasures” grant program via the President’s Committee on the Arts and Humanities.