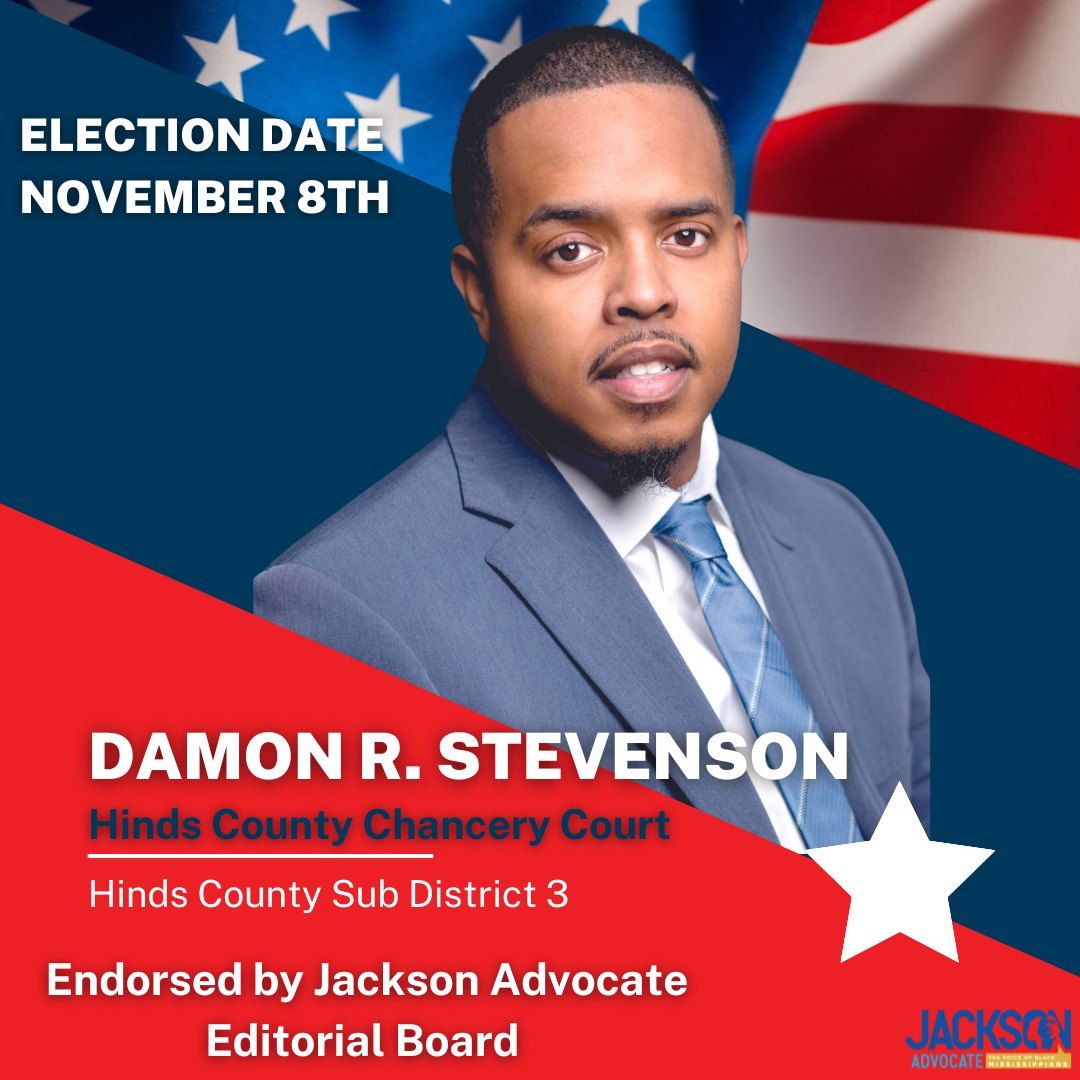 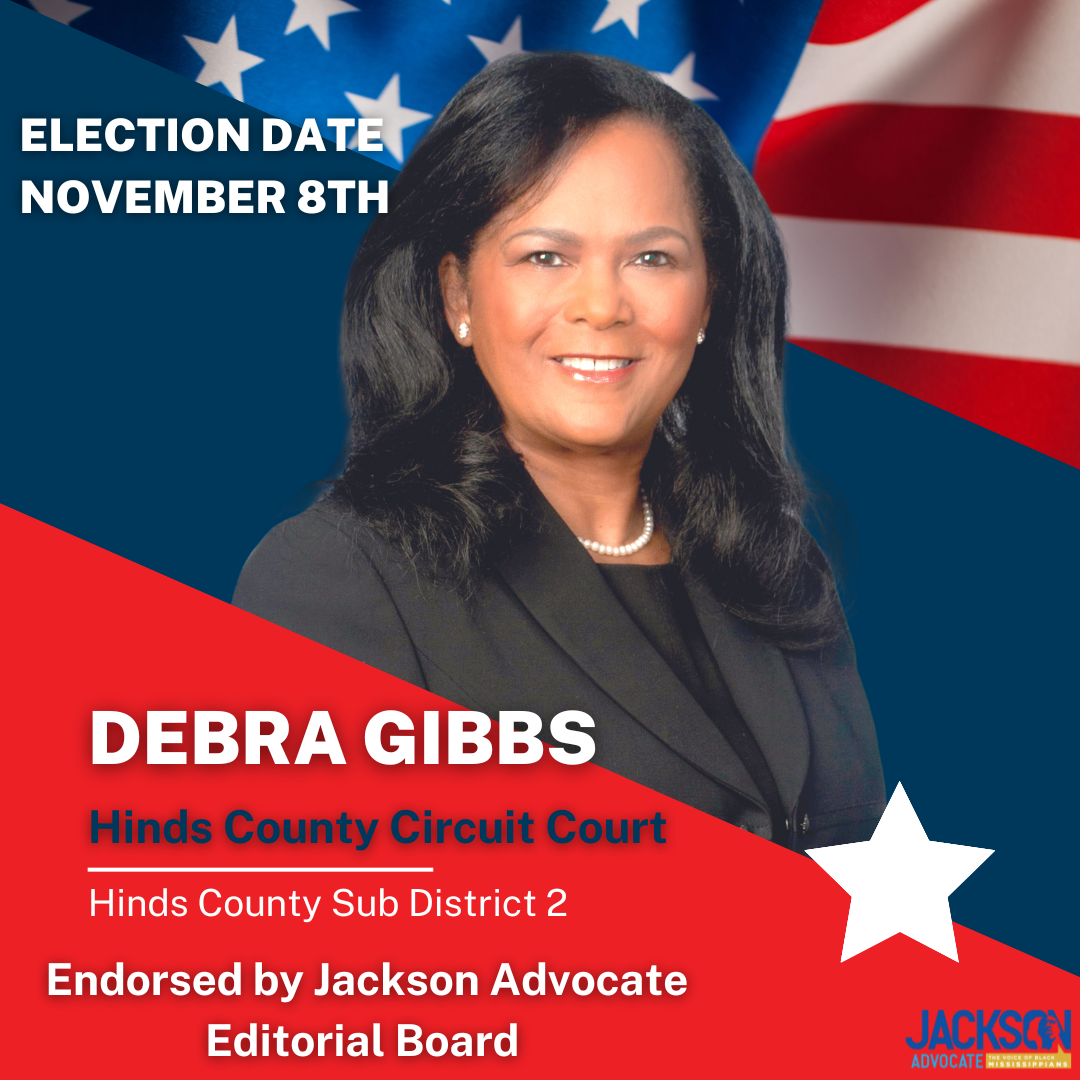 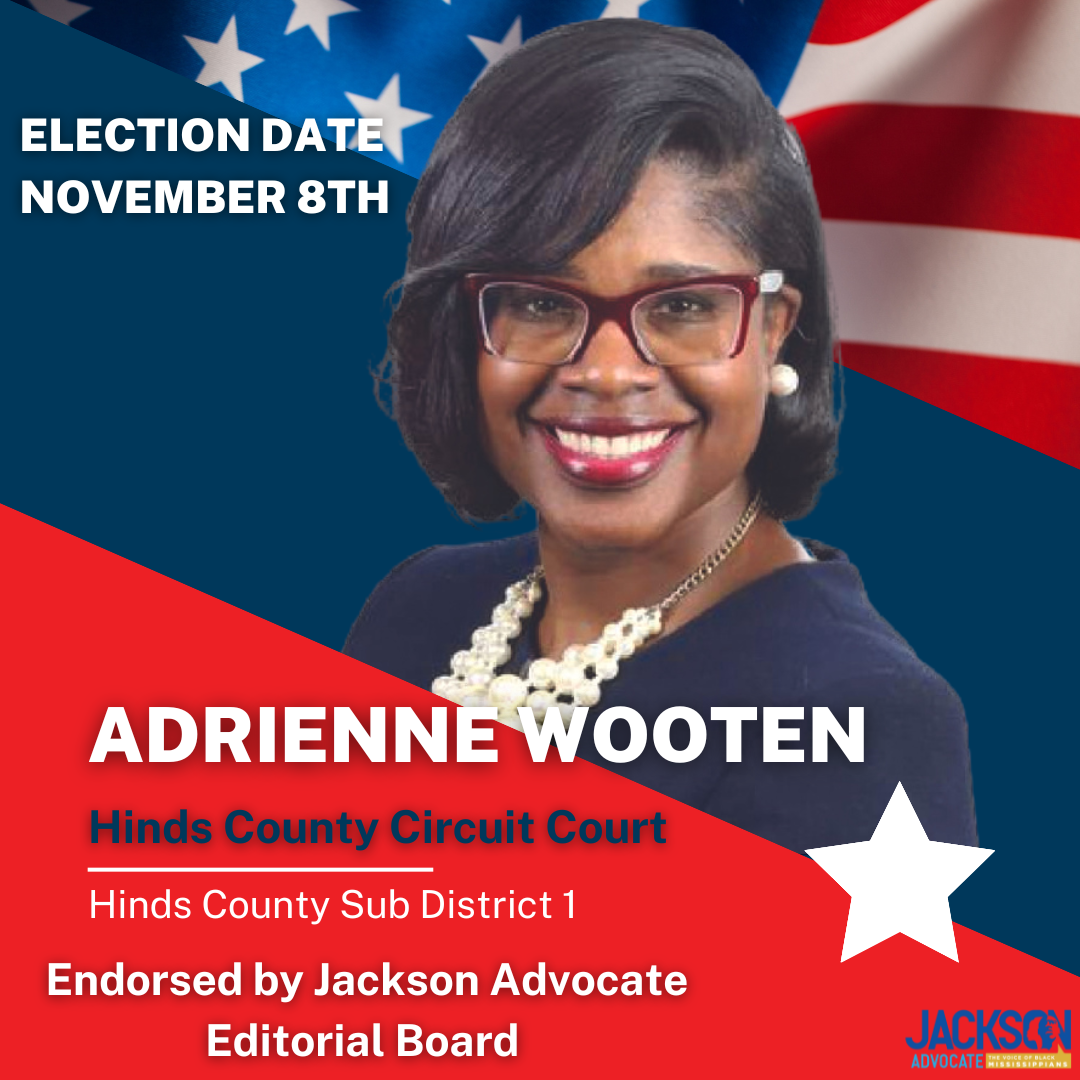 Chancery Court judges preside over “disputes involving equity, domestic matters – adoptions, custody disputes, and divorces – guardianships, sanity hearings, will, and challenges to the constitutionality of state laws,” according to the State of Mississippi Judiciary. Juries are not typically a part of Chancery Court trials.

Mississippi has 20 Chancery Court districts in total. Hinds County makes up District 5 and has 4 subdistricts with one judge presiding in each subdistrict. Subdistrict 1 Judge Dewayne Thomas, Subdistrict 2 Judge Tiffany Grove, and Subdistrict 4 Judge Crystal Wise Martin run unopposed in the November 8 election. However, Subdistrict 3 is up for grabs since Judge Denise Sweet Owens announced her retirement earlier this year.

The candidates running for this seat are Tametrice E. Hodges, Gayla Carpenter-Sanders, and Damon R. Stevenson. The Jackson Advocate Editorial Board voted 60% in favor of Damon R. Stevenson. The board favors Stevenson for his “experience and innovative ideas,” and because “Stevenson already serves as a judge and understands the judicial role of a chancellor,” along with his prior experience as a clerk for retiring Judge Owens.

Tametrice E. Hodges received 40% of the editorial board’s vote. One member stated that she is the “most qualified” and has “awareness of the community she serves.” Another member noted that she has the “temperament and qualifications” for this position. Both candidates received high ratings in the areas of trust/integrity, community engagement, experience, and accessibility.

Circuit Court judges preside over “felony criminal prosecutions and civil lawsuits. They also hear appeals from County, Justice, and Municipal courts and from administrative boards and commissions such as the Workers’ Compensation Commission and the MS Department of Employment Security.” Twelve jurors are usually a mainstay in these trials.

Mississippi has 22 Circuit Court districts. Hinds County makes up District 7 with 4 subdistricts. The Subdistrict 1 seat is currently occupied by Judge Adrienne Wooten who is being opposed by David Lindzey. The JA Editorial Board endorses Judge Adrienne Wooten by 100%, citing “personal knowledge of the law,” “experience and preparation for the office,” “proven track record”, and being “committed and honest.”

Subdistrict 2 is being vacated by longstanding Judge Tomie Green who is entering retirement. Four candidates are vying for this seat: current District 72 Representative Debra Gibbs, Bryant D. Guy, Trent L. Walker, and Wendy S. Wilson-White. The JA Editorial Board endorses Debra Gibbs by 50%. The Board cited her “diverse experience, law knowledge, and preparation” as reasons she should become Subdistrict 2 Judge.  Wendy S. Wilson White garnered 33% (for her “forward thinking and ability to devise a sound plan”) and Trent Walker garnered 17% (for his “experience and proven track record”) of the editorial board vote.