After her husband, Frank, died in 1906, Blanche Jarvis felt it was necessary to get her two daughters and son out of Vicksburg for their protection.

The granddaughter of Blanche Jarvis, Dr. Francesca Thompson, who lives today in New York at age 90 and is one of the nation’s greatest authorities on the history of Black theater, told of the great odyssey of her mother, Evelyn, the eldest of the three children, who was born in Vicksburg on July 26, 1896.

Blanche Jarvis,  Thompson says, “had two very light-skinned daughters that she was not going to trust to the racism of Mississippi. Because she had relatives in Chicago, she moved to Chicago.”

Blanche Jarvis helped to build Chicago’s first Black Apostolic church, says her granddaughter. An apostolic church street preacher, Blanche would take her daughter Evelyn along to sing and appeal to the crowds to get them to come to Jesus. The two younger children died of pneumonia before maturing into adulthood.

“My mother was her biggest asset,” said Thompson. “They’d stand on street corners and my grandmother would say, ‘Sinners come home, come home to Jesus,’ at which point my mother would cry on cue.”

Evelyn was also a member of her high school’s drama group, the Lady American Minstrels, and they sometimes toured with their plays.

Frank Preer, a Chicago nightclub owner, attended one of these shows and was enthralled with Evelyn’s singing and acting talent. After she finished high school, he asked her to marry him and to come and sing at his club. Frank Preer married 19-year-old Evelyn Jarvis on January 16, 1915.

Frank Preer was a friend of the young novelist and aspiring filmmaker Oscar Micheaux, who had recently moved to Chicago after a number of years of working as a porter on the railroad and as a homesteader in South Dakota. Preer invited Micheaux to come and see his young wife perform. Micheaux was captivated, according to Francesca Thompson. And he offered her a starring role in his first film, “The Homesteader.” 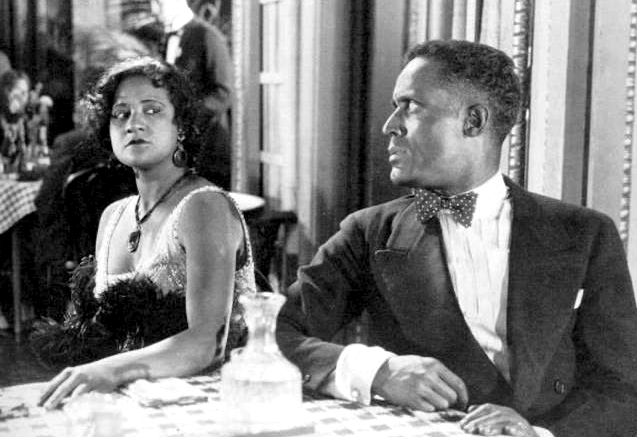 The legendary career of Movie Queen Evelyn Preer was about to begin. But Evelyn was hesitant to take on a movie role before consulting her mother. Evelyn’s mother gave her consent with two conditions: That Evelyn would not smoke while on screen and that she was not to take off her clothes.

In 1919, Micheaux cast Evelyn Preer in the leading female role of “The Homesteader,” his pioneering film based on his novel and his own life experience as a homesteader in South Dakota. Micheaux was very satisfied with Evelyn’s performance.

“Miss Preer could play any role assigned her and always did so cheerfully and without argument,” Micheaux said of Evelyn Preer’s acting.

He went on to cast her as his leading lady in 10 more of his films. The 1920 production “Within Our Gates,” Micheaux’s only complete film with Evelyn Preer to survive intact,  is considered a masterpiece and a bold challenge to the racist content of D.W. Griffith’s 1915 pro-KKK film, “The Birth of a Nation.” Evelyn Preer was cast as Sylvia Landry, a teacher at Piney Woods Institute in Mississippi who traveled to Boston to raise money for the school under threat of being closed for lack of funds to pay its debts.

The film included location scenes in Vicksburg and surrounding areas during a time when most movies were shot on sound stages in New York or Chicago. The storyline of the movie exposed the hypocrisy of the white supremacist government and ruling class of Mississippi and other Southern states that adopted the policy of minimal funding for Black public education under the professed belief that education for Black children was a waste of precious resources.

Micheaux’s denunciation of such racist propaganda through Preer’s character offered instead a clear statement in support of greater funding for Black schools and colleges throughout the United States. Preer’s refusal to pass for white, as several white producers asked her to do to appear in their films, was unwavering. Even after signing a contract with Paramount Studios, she left the studio early because the studio would sometimes require her and her co-star and second husband Edward Thompson to wear blackface makeup to darken their skin.

Although their success coincided with the birth and growth of the Harlem Renaissance – perhaps because of their base in Chicago – Preer and Micheaux were rarely included in the discussion of historians of the Harlem movement, who were mostly based in New York.

Paul Robeson, who starred in Micheaux’s “Body and Soul” in 1925, was a witness to Evelyn Preer’s reign as “the First Lady of the Silver Screen.”  Robeson said Preer was “the race’s most famous and versatile actress.”

After more than seven years and eleven films with Micheaux, Evelyn Preer signed on with Paramount and performed in three short films before walking out on the contract because she felt the studio was demeaning Black people and she wanted no part in such representations.

Evelyn made three films as a contract player for Paramount and Christie Productions  – “Melancholy Dame” (1929), “The Framing of the Shrew” (1929), and “Oft in the Silly Night” (1929). But she refused to perform in roles she felt demeaned her race. These three short films were the first talkies she was cast in, although “Georgia Rose” was her first feature length talkie.

“Georgia Rose” (1930) is claimed by some film historians as the first “talkie” movie to include a Black actor. The Black-owned Lincoln Motion Picture Company had begun its operation in 1915. Preer also played minor roles in two more Hollywood films, both with major white stars –  “Ladies of the Big House”  in 1931, and her last film “Blonde Venus” with Marlene Dietrich in 1932.

Evelyn Preer’s first move into professional show business had begun with her talent as a singer. That’s what attracted Frank Preer to her and led to her introduction to Oscar Micheaux. Evelyn never quit the singing business, however, and there are accounts of her singing with such greats as Duke Ellington, Ethel Waters, Eubie Blake, and bandleader Red Nichols.

The Discography of America Historical Recordings lists eight recordings for Evelyn Preer over the two-year span of 1926-27. Two are with Duke Ellington and his orchestra – “Make Me Love You,” and “If You Can’t Hold The Man You Love (Don’t Cry When He’s Gone).” The all-too-familiar “Bye Bye Blackbird” was recorded by Preer in 1926.

Several biographical sketches indicate that Preer sang a number of voiceovers for white actresses without receiving credit for her work. But that phase of her singing career would have been a relatively short one due to the fact that singing on screen and voice overs were introduced only with the “Jazz Singer” starring Al Jolson in 1927.

Although the movie industry saw a continued growth among Black performers and viewing audiences, the primary entertainment for Black people remained the stage show productions, featuring the minstrel shows and live stage comedy acts that had been the standard for over a century.

In 1915, actress Anita Bush seized upon the chance to start up a Black dramatic stock acting company that became known as “The Lafayette Players.” Starting out at the Lincoln Theater in New York, they eventually grew to four different groups: The Lafayette Players of New York, an East Coast traveling group, a Chicago group, and a national group. Evelyn joined the Lafayette Players in Chicago in 1922, according to her daughter, Dr. Francesca Thompson. She married the immensely popular leading man, Edward Thompson, in 1924, having divorced her first husband, Frank Preer, in 1923.

Evelyn toured with the Lafayette national group on a regular basis, although she would take a leave when she had a movie call. This was her pattern up to the time of her pregnancy with her first child and her death seven months later in November 1932, after contracting  pneumonia in Los Angeles.

When producer David Belasco was doing “Lulu Belle,” he wanted to cast Preer in the leading, but show business rules at that time would not allow a Black actress to assume a leading role in a major production. Even though the character was supposed to be a light-skinned prostitute and singer, the lead role was given to a white actress, Lenore Ulrich, with Preer being her understudy. Belasco suggested that Evelyn should go to Europe with him for two years and when they came back, she could be cast in the leading role of “Lulu Belle,” a role for a Black Creole type.

“He (Belasco) said to my mother, ‘Evelyn, I’ll take you to Europe. We’ll stay there a couple of years and when we come back, no one need ever know your color.’ She told him, ‘Mr. Belasco,  I don’t want to pass for white. What will I do with Eddie (her husband)?’  He said that wouldn’t matter. ‘We’ll put him in the background someplace.’ She said, ‘No. You’ll take me as I am, or you don’t take me.’”

Preer played the role of Sadie Thompson in the Somerset Maugham’s “Rain.” And she also played the role of “Salome” with the “Dance of the Seven Veils” in a late-night staging that attracted prominent artists such as Charlie Chaplin and Theodore Dreiser, said her daughter. 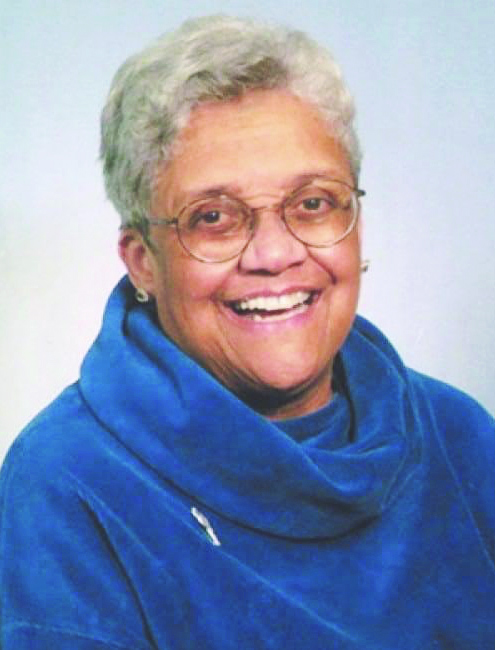 Dr. Francesca Thompson, the daughter of Evelyn Preer and Edward Thompson, was born seven months before her mother died and was given the name Edeve. There was no direct link between her birth and her mother’s death, Thompson says.

“The Christy Minstrels bought the Lafayette Company, and they went to Los Angeles and opened at the Lincoln Theater. That’s where my mother got pregnant, and after I was born, things were hard, they were pushing, trying to stay alive because of the Depression. Dad was in Chicago with the Porgy and Bess production.”

Evelyn was in LA when she contracted pneumonia. She had an appointment with her photographer and was waiting for her taxi that was late in coming.

“It was raining hard, and the taxi didn’t come,” her daughter said. “She went out to the corner to wait for the taxi. The nanny said she kept looking out the window and Evelyn was standing outside in all that rain.”

When Evelyn arrived at the photographer’s, she had a fever and couldn’t breathe well, according to Thompson. Rather than postpone the session, she sat through it. When she returned home, the nanny put her in bed, but three days later, she was rushed to the hospital.

“She went into a coma and never came out of it,” says her daughter who has had to rely on the memories of the adults in her family. Evelyn Preer died on November 27, 1932 in Los Angeles, aged 36.

Her father, she says, was so devastated by Evelyn’s death that he never set foot on the stage again. Edeve joined the Catholic Sisters of St. Francis in 1952 and took on the name Sister Francesca. She went on to earn a PhD in Speech and Drama from the University of Michigan. She retired as a professor and assistant dean from Fordham University in 2006.

“His peers in theater all begged him to come back to the theater,” his daughter said. “He stayed in LA, tried to do the movies. But, in 1932, if you weren’t Stepin Fetchit, you couldn’t make it.  He was too dark to be white, and he wasn’t going to pass for white because of what his mother said against passing for white.”

Edward Thompson returned to his hometown of Indianapolis to be with his infant daughter and her grandmother, who opted to raise her. He died there in 1960.