It must have been an exciting, shocking and a head-spinning whirlwind of a  roller-coaster ride for the reputed “high-spirited” Agatha Alphosin Ganteaume, daughter of  François-Alphonse Ganteaume,  Trinidad’s wealthiest agrarian capitalist of the late 19th Century. She probably also surmised that her father was so anxious to marry her off that he had brought into her life this rather nerdy, dour London-trained barrister of Chinese descent. But, boy, was she in for a whole bunch of surprises that would continue throughout her married life.

Known also as Aisy, Agatha didn’t think that she would be able to fulfill the role of a traditional wife of an upper-class “Black Creole” family who sat at the top of the economic food chain of an Anglo-French-Spanish and African-Native American selectively blended society.

Trinidad and Tobago obtained independence in 1962. Nevertheless, Caribe, Arawak and African peoples formed the basic mestizo ethnic culture, while Spain, Britain, France, and the Netherlands all added to the mix that had been brewing since Columbus’ landing there in 1498 and had kept on swirling through the incorporation of Trinidad with Tobago in 1889, and beyond.

The blog writers on Speaking of China claimed that even in a multi-ethnic, predominantly mestizo colony like Trinidad – later uniting as Trinidad-Tobago – where the tolerance of race-mingling for sexual gratification was viewed as a positive social interaction, although the marriage option, however, was not considered the fashionable thing to do.

“In the atmosphere of strong racial prejudices,” the Speaking of China blog says in its Oct. 3, 2013 posting, “it was still a mystery how a Chinese and a French Creole were finally affianced and married, even allowing for the fact that Aisy was a young girl of great resource and that Eugene had even then shown a talent for diplomacy. The key to the mystery was in Monsieur Ganteaume’s hand.

“The marriage might have been a love match, but it would not have been too far from the truth to say it was initiated to some extent by Monsieur Ganteaume himself. Anxious to find a suitable husband for his high-spirited natural daughter, he might have requested the aid of the good sisters of St. Joseph and the good fathers of St. Mary’s. The good fathers of St. Mary’s recommended Eugene to the good sisters of St. Joseph, and both presented the candidate to Monsieur Ganteaume for inspection. Eugene, as human as any young enterprising lover, was more than ready to marry a wife with a dowry, considerable by the standard of the Chinese community, and an influential father.

“Aisy passed away in 1926, and Chen would go on to marry Georgette Chen, a Chinese painter. But it’s nevertheless fascinating to know that Eugene Chen and Agatha Alphosin Ganteaume wedded at a time when interracial marriages were rare and even illegal in many countries.” 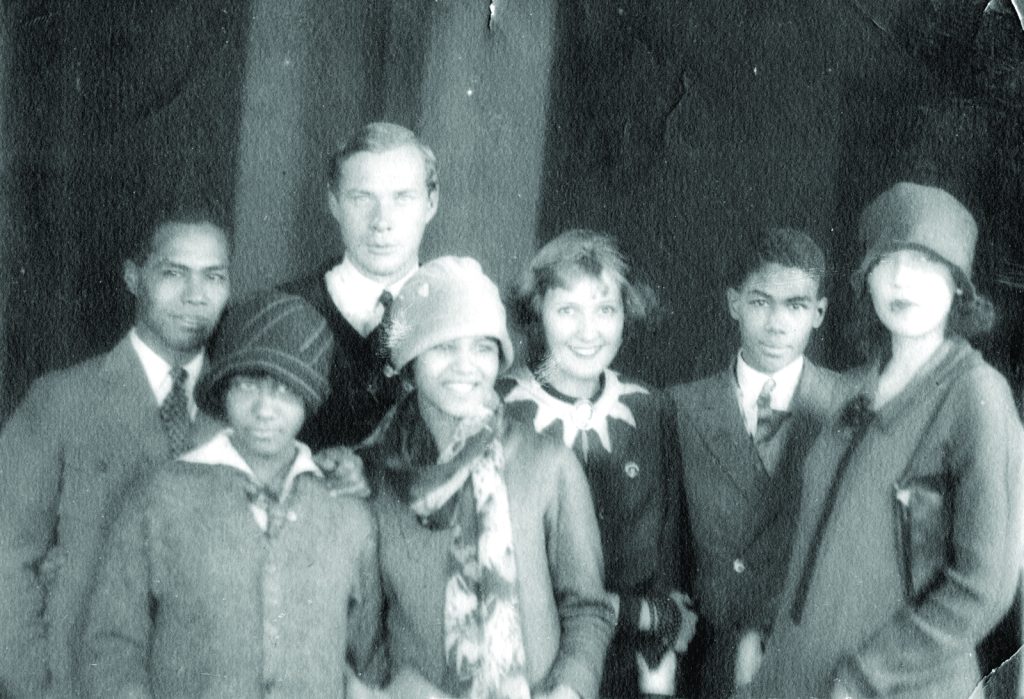 One of the first overseas Chinese to practice English law, Eugene Chen’s groundbreaking achievement came in 1927 when he helped China reclaim the colonial port cities of Hankou and Jiujiang from the British government. Having failed to learn Chinese from him parents, especially his father who had been forced to leave China because of his participation in the Taiping rebellion of 1850-1864, Chen established three English-language papers in China.

Eugene Chen, who was born in Trinidad in 1878 and passed away in Shanghai inn 1944, is best known as the foreign minister to four different Chinese governments, beginning with Sun Yat-sen’s Republic of China that was established in 1911. It was Sun’s 1912 speech in London to a group of overseas Chinese that inspired Chen to move to China and support the new government, even though Chen couldn’t even speak or read Chinese at the time.

After Sun Yat-sen’s death in 1925, the several revolutionary factions that had worked together during the wise medical doctors inspiring leadership suddenly plunged into a war of all against all in order to rise to the top of the top of the political heap, several opposing factions even serving the same master – the Soviet Union.

“The National Revolutionary Army,” Wikileaks says, “the military arm of the KMT (Kuomintang), captured the three cities of Wuchang, Hankou, and Hanyang in a series of battles from August to October 1926 during the early stage of the Northern Expedition, and merged their municipal governments to form the Wuhan nationalist government.”

Following the capture of Wuhan, the existing Kuomintang (KMT) government, which had been based in Guangzhou, moved there in December 1926.

This short period of 10 months would have been the finest hour for Eugene and Aisy—their brief shining moment in the political spotlight of the world —if only she had not died six months before her beloved “nerd” of a husband became the provisional President of the Republic of China based there in Wuhan.

Kuomintang General Chiang Kaishek moved his army to Wuhan in April 1927 and began purging the followers of Chen and Wang. This was known as the “Nanjing-Wuhan Split”.

The Wuhan government strategically withdrew as Chiang advanced his reign of terror, a period of respite that allowed him to form his own government in Nanjing. While Chiang continued the Northern Expedition on his own, increasing tensions between communists and the KMT in the Wuhan government resulted in a new purge of communists. Eventually a short-lived reconciliation was the protocol as an impending conflict with Japan was lay on the near horizon, followed by China’s involvement in World War II that was about to break out in Europe before spreading to all of Asia. The Wuhan government was merged into the Kuomintang again and Chen found it expedient to lie low until the political landscape became clearer.

“When war with Japan broke out in 1937,” the Singapore Women’s Hall of Fall noted, “Eugene was imprisoned by the Japanese, and he died a prisoner of war in 1944.”

Aisy’s death did not erase the footprint she had left on the sands of modern history.  Her four surviving offspring have conducted themselves on the world stage so as to bring deserving respect and international praise to the entire Chen family, dating back to Eugene’s father’s gallant efforts to turn out both the British and the decrepit Qing dynasty, before he ventured toward a new destiny in Trinidad.

Percy Chen (1901-1986), a lawyer, worked with his father for many years – Chen moved to Hong Kong and established a private law practice in 1947. He was a founding member of the Hong Kong Bar Association in 1948 and served as its first secretary. In 1949, Percy Chen and some other pro-Communist intellectuals and professionals founded the Hong Kong Chinese Reform Association (HKCRA). He died in 1986.

Sylvia (Si-Lan) Chen (1905-1996), an internationally known dancer, married the American film historian Jay Leyda year after her engagement to Langston Hughes ended in disappointment for her.

Why did she give up on Langston Hughes? Several accounts assert that Langston was “gay” and had no interest in feminine courtship. Hughes biographer Wallace Best of Princeton University contends, however, that “Hughes’s evasiveness about religion and sexuality was strategic and a style of life that eschewed the notion of fixed identities. Hughes’s approach to religion was not static and his sexuality was most likely on a spectrum, making attempts to mark him religiously or in terms of a particular sexual identity difficult, if not impossible.”

Jack Chen (1908-1995), became famous internationally as a political cartoonist during the Second Sino-Japanese War (1937–1945), and in 1973,  he wrote a revealing account of his life during the Cultural Revolution,  “A Year In Upper Felicity”.

“In 1971,” Wikileaks reports, “he (Jack Chen) came to the United States and lectured widely about Chinese affairs, including at Harvard, Yale, Princeton, Stanford, and UC Berkeley. He wrote for several publications including The New York Times and Esquire. In 1972-73, Chen worked as a consultant to the New York State Department of Education, helping to develop study programs on modern China. In 1973-77, he worked at Cornell University, lecturing, researching, and writing. In 1978-82, he worked at the Chinese Culture Center of San Francisco and organized the exhibition “Chinese of America,” the research for which became the basis for his book The Chinese of America.”

Yolanda (Yulen) Chen (1913-2006), sent to the USSR for safety during one of the deadliest stages of the civil war in China, stayed there for the rest of her life and came to prominence as a camerawoman. She died in Russia in 2006.